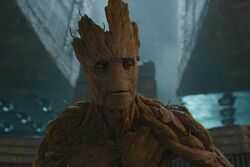 Groot is a kindhearted soul who abandoned his warlike species at a young age. He later became allied with the small-time thief, Rocket Raccoon, who became his best friend. Rocket misguided Groot into becoming an inter-galactic criminal, making them some of the Nova Corps' most wanted.

Rocket and Groot later found themselves wrapped up in a group of inter-galactic criminals where they ended up in a situation where they were forced to save the universe from Eson the Searcher. They later dubbed themselves the Guardians of the Galaxy, and Groot was just grateful to have found more friends.

Retrieved from "https://marvelcomicsfanon.fandom.com/wiki/Groot_(Earth-9999)?oldid=245968"
Community content is available under CC-BY-SA unless otherwise noted.