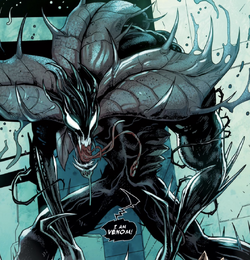 After being banished from his home world of Planet X for being too kind and compassionate, Groot found himself traveling across the galaxy. Eventually, he befriended a small creature named Rocket, who hired Groot to be his body guard.

Over time the two of them became close friends, and even ended up joining a small crew of space pirates alongside a half-human, half-Shi'ar Star-Lord and a deranged Dakkamite named Drax the Destroyer. They went on to accept a job to apprehend Gamora, the daughter of Thanos. However, after uncovering the truth, Groot stood up for Gamora and convinced the others to welcome her onto the ship as a member of the Guardians.

The Guardians would eventually receive word of the Prophecy of Infinity from the Avengers, and began actively trying to prevent the future. They eventually made their way to the Earth, where the Black Order member Cull Obsidian was being held in Wakanda. The Prophecy foretold that Obsidian would bond with the Venom Symbiote and become unstoppable.

When they reached Wakanda, they ended up engaging in battle with Kraven the Hunter, the current host of the Venom symbiote. When Gamora decapitated Kraven, the Symbiote made a beeline for Cull Obsidian. Groot was unwilling to let this prophecy unfold when he had the power to stop it, and launched himself in between the two of them, bonding himself to the Symbiote. After recapturing Obsidian, Groot and the Guardians returned to space with the Venom Symbiote. From there, he began struggling with the Symbiote's dark side, and over time began to teach it how to be good, overwhelming it with his large, compassionate heart.

Groot and Venom remained bonded together for years while the Guardians worked to prevent the Prophecy of Infinity. When the Guardians teamed up with the Avengers to fight against the Black Order during the race for the Soul Stone, Groot and Venom were separated, resulting in the symbiote re-bonding with its first host, Spider-Man. Having changed its ways after the time it spent with Groot, the two thanked each other for the time they were able to spend together, and wished the other well on their continued travels.

Retrieved from "https://marvelcomicsfanon.fandom.com/wiki/Groot_(Earth-101)?oldid=250198"
Community content is available under CC-BY-SA unless otherwise noted.