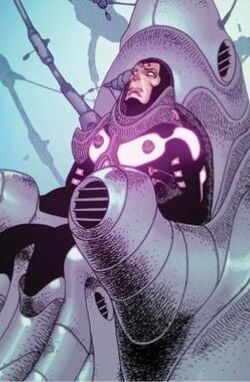 The Undead, Greatest in Eternus, High Eternal, O.M., Champions of the Eternals, The Puppet
Identity

My physical presence may be long gone to filthy mortals like you Terrans, but the will of Eternus lives on 'till eternity through the gods' holy tools, as it was meant to last since the unknown beginning of reality...

The full history of the superhuman known as Overmind was shrouded with mystery, other than the facts that he was named after the ancient Eternal of the Andromeda Galaxy planet Eyung, Grom, and was born in the Kingdom of Eternus, a European country ruled by a totalitarian extremist rulers who mainly serve the extraterrestrial race that was the Eternals as their deities, with the exception of the Terran hero Hyperion, for they believed he and most of his family were traitors of the Eternal High Council long before the destruction of the main Eternal planet.

At some point in time, Grom and half of his terrorist group were eventually defeated by the Squadron Supreme, a team of superheroes formed by the U.S. Government in order to carry out missions on its behalf, under the jurisdiction of the national military's General Dennis Scrump. In his defeat and the fall of half his extremist group, Grom was handed over the custody of the military, with General Scrump and his few allies secretly shutting down Grom's entire system through surgical means, physically killing him, but not before having a genetically-modified retro-virus, codenamed G.M., be implanted inside the now lifeless husk that was his body. The retro-virus would give Scrump control over Grom's corpse as a part of his new secret plan to cause a catastrophe in public that would challenge the Squadron Supreme's might as a heroic team.

It only took the Squadron Supreme almost a couple of weeks to figure out that Scrump, along with other superiors of the government, has been unknowingly manipulated by Grom, effectively convincing the U.S. Government to retain his power over the Squadron Supreme since the latter was activated. With Nighthawk finally helping the founding members of the Squadron, albeit still in secret, they finally set their move to find and take down the Overmind to free the coerced ones from his diabolical orders before it's too late, since Hyperion believes that Overmind would eventually brainwash the entire world into following him for the rest of their lives.

After several hours of investigation and confrontations against the coerced ones whom they had interrogated, the Squadron was able to tail the hidden base of the Overmind, where they found out that the villain had already activated a machine which the government had previously stored that could enhance his telepathy into "technopathy" and be able to use all electronics all over the world to control the minds of every single soul on Earth who uses an electronic device. Overmind did activate the machine, proving his plan to be a success to an extent, with his tech being able to force most of the Squadron to his submission, only to see that two members of the Squadron had willpower on their side: Nighthawk and Thundra. Despite having to reluctantly face their powerful allies, the two were able to destroy the machine for good and beat down Overmind into unconsciousness, reverting before Hyperion and the rest before they could have killed them and caused any more devastating blow across Squadron City.

With the defeat of Overmind, the Squadron had thought they truly won the battle, until they also discovered that Overmind has been long dead, with Doctor Spectrum's Power Prism detecting that his corpse was being controlled by something implanted on his spine, something that they later found out was being controlled by someone else. A few more investigations later, Nighthawk eventually figured out that the main mastermind was indeed General Scrump all along, and using his advanced tech to duplicate the once decrypted files Scrump and his secret council has been hiding for decades, before exposing it the public and the authorities, revealing the General's true colors and intentions once and for all. By the moment Nighthawk informed the Squadron of his findings, they once again banded up to help the authorities defeat and arrest Scrump and his group. And with the defeat of Scrump, they decided to finally their existence and identity to the public, with the U.S. Government ultimately declaring them as an independent super-heroic organization during a later public press conference in Rocket Central, as an act of gratitude after the Squadron had saved the entire world from Scrump's secret agenda.

Despite having General Scrump's identity finally exposed and subsequently arrested for his discrete crimes, Grom's corpse would later found during the day the secret warehouse of Scrump would be inspected by the authorities assigned to visit them, although it almost immediately fell under the custody of Burbank International, with the confiscation of Grom and other tech formerly owned by Scrump being authorized by one of Burbank's best representatives, Rachel Queen. Although contrary what the representative had claimed, Queen was later revealed to have never been affiliated with Burbank International at all as revealed by Burbank's superiors (including Emil Burbank himself), and "Rachel Queen" was just an alias used by the infiltrator to cover up her real name and let her true agendas remain undiscovered by the authorities who are now after her.

Retro-Virus Empowerment: After being taken over by the genetically-modified retro-virus known as G.M., the latter duplicated the superpowers of Grom when he was still alive. Each virus contain a duplicate of Grom's consciousness, and are able to take over another human's mind and body through telepathy and technopathy, although temporarily unless Grom finds a way to make the transferal permanent.

Retrieved from "https://marvelcomicsfanon.fandom.com/wiki/Grom_(Earth-61712)?oldid=253331"
Community content is available under CC-BY-SA unless otherwise noted.