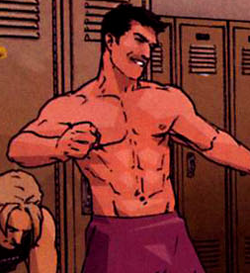 Greg Norris was class president and basketball captain of Teddy Altman's high school. Teddy began to use his shapeshifting powers to mimic Greg's physical appearance and abilities. Greg and Teddy quickly became friends. Eventually Teddy "came out" as a shapeshifter to Greg. Greg was thrilled and immediately convinced Teddy to use this powers to impersonate actual heroes like Johnny Storm, the Hulk and Tony Stark. When Greg heard that the Avengers Mansion was empty, he and Teddy headed there to explore. However, when Greg began looting, Teddy forced him to stop with the threat of violence. Greg and Teddy's friendship ended that night.

Retrieved from "https://marvelcomicsfanon.fandom.com/wiki/Greg_Norris_(Earth-1010)?oldid=179873"
Community content is available under CC-BY-SA unless otherwise noted.