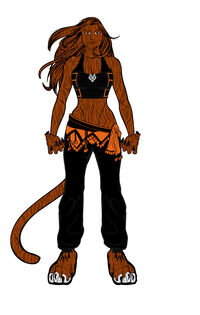 Black
Unusual Features
Tigress has the vertically-slit pupils of a feline, as well as claws and a tail. She is also covered with tiger-striped fur. She has black hair in humanoid form, and she has tiger-striped hair in cat form.
Status
Citizenship

Greeshma Grant was one of Bollywood's most popular actresses. She made the crossover into the American film industry at a relatively young age. Greeshma met Patricia "Trish" Walker in Hollywood and occasionally worked with her on some projects. The two grew to become great friends, even though they had a rough start to their friendship. Trish would eventually confide in Greeshma of her mother's abuse of her. After this, Greeshma convinced and helped Trish become emancipated and Trish moved in with Greeshma's family. They became like sisters. Greeshma, later on in her career, would go on to costar alongside Simon Williams in several films. The two became romantically linked.

Retrieved from "https://marvelcomicsfanon.fandom.com/wiki/Greeshma_Grant_(Earth-515)?oldid=255306"
Community content is available under CC-BY-SA unless otherwise noted.