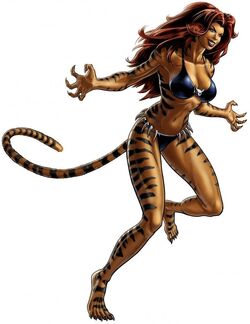 Widowed
Origin
Origin
Tigra joined the Secret Avengers due to the new discoveries about her powers.
Creators

Those Cat People were monsters. And they're turning me into one of them. I'll be a mindless freak, just a feline... a mindless monster.

Tigra's history is exactly the same as that of Earth-616's Greer Grant up until the Marvel NEW! relaunch.

Tigra began to enter states of feral rage that made her bloodthirsty. When chased down by the Secret Avengers, she nearly killed them before snapping back to normal. She joined the team until she controlled her rages, and it was discovered her powers made her a kind of werewolf, and she would begin to fall into a mindless state. With the belief that this transformation is inevitable and irreversible, she became a full member of the SA to make her last years count.

Feline Physiology: Tigra has many powers due to her cat-human body.

Greer is a skilled combatant, pilot, and tracker.

Retrieved from "https://marvelcomicsfanon.fandom.com/wiki/Greer_Grant_(Marvel_NEW!)?oldid=255135"
Community content is available under CC-BY-SA unless otherwise noted.