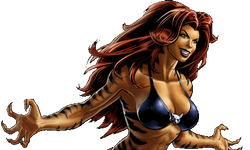 Black, Orange
Unusual Features
Tigra has the vertically-slit pupils of a feline, as well as claws and a tail. She is also covered with tiger-striped fur. She has black hair in humanoid form, russet in cat form.
Status
Citizenship

Greer Grant was the recipient of two separate sets of superhuman abilities, one scientific and one mystical in nature. As a laboratory assistant to Dr. Joanne Tumolo, Grant became involved in a physiological conditioning program that would enable a human being to attain his or her full physical and mental potential. Out of financial desperation, Dr. Tumolo had accepted private funding for the project from Malcolm Donalbain, an eccentric who planned to use her conditioning equipment in his nationwide chain of health clubs.

Not trusting the test subject that Donalbain had coerced her to use, Tumolo had Grant secretly undertake the experiment alongside the other woman. Donalbain's test subject, Shirlee Bryant, and Greer Grant emerged from the battery of treatments with superhuman physical capabilities. Dressed in one of Donalbain's specially designed cat costumes, Bryant died in a test of her abilities. Donalbain had his henchmen set off dynamite charges in the laboratory to make it appear that Bryant had died accidentally in an explosion. Tumolo was injured in the explosion. Believing her mentor to be dead, Grant determined to stop Donalbain's plans. She donned a stolen costume, and calling herself the Cat, thwarted Donalbain's plans and forced him to commit suicide. Grant soon learned that Tumolo had not been killed but had been hospitalized for apparent brain damage. During this time, Grant, as the Cat, pursued a very brief career as a crime-fighter, operating mostly within the Chicago area.

Unknown to Grant, Tumolo was a member of the Cat People, a race of humanoids magically evolved from cats in Europe during the Middle Ages. Prior to the explosion Donalbain had engineered, Tumolo had become aware of a plot by the subversive organization Hydra to steal a bacterial culture that had been developed by Tumolo's ancestors. Hydra had discovered the secret of Tumolo's ancestry and suspected her of possessing the formula for "The Final Secret." Tumolo had chosen to feign brain damage in order to evade Hydra, but they abducted her from the private home where she had apparently been convalescing.

Grant put on her Cat costume and pursued them. Hydra agents fled from the Cat's attack, but during the confrontation managed to shoot her with "alpha radiation." To save Grant life, Tumolo and the Cat People mystically transformed her into the legendary half-human, half-cat warrior they called the Tigra. As Tigra, Grant helped the Cat People defeat the Hydra agents.

Although she was able to use the cat's-head amulet to change back to her human form, Grant became so accustomed to and enamored of her feline form that she seldom made the transformation. Moving from Chicago, she became a full-time adventurer.

Superhuman Strength: Tigra possesses superhuman strength sufficient to lift about 10 tons, enough force to deform a 1 inch thick steel bar with ease. Her physical strength also extends, to a lesser degree, to her powerful leg muscles allowing her to perform a standing jump of 12 feet in height.

Superhuman Speed: Tigra can run and move at speeds superior to that of even the finest human athlete. Her powerful leg muscles and superhumanly strong bone composition enable her to reach speeds up to 60 miles per hour over short distances.

Superhuman Stamina: Tigra's advanced musculature produces considerably less fatigue toxins during physical activity than the musculature of an ordinary human. She can physically exert herself at peak capacity for about 24 hours before the build up of fatigue toxins in her blood begins to impair her.

Superhuman Durability: Tigra's bodily tissues are much harder and more resistant to physical injury than those of an ordinary human. Her body is able to withstand great impact forces and blunt trauma that would severely injure or kill a normal human, though she is far from invulnerable.

Superhuman Agility: Tigra's agility, balance, and bodily coordination are enhanced to levels that are beyond the natural physical limits of the finest human athlete. She can perform complex gymnastics routines with little effort.

Superhuman Reflexes: Her reflexes are similarly enhanced and are superior to those of the finest human athlete.

Regenerative Healing Factor: If Tigra is injured, she is capable of regenerating damaged tissue faster than an ordinary human. She can heal injuries as severe as broken bones within a matter of days. She is unable to regenerate missing limbs, organs, or brain cells.

Superhuman Senses: Tigra's senses are about ten times as keen as an average human's, and about five times that of an average cat's. Tigra's eyesight extends into the infrared portion of the electromagnetic spectrum. She has superhuman visual acuity. Her vertically-slit pupils allow a greater range of vision above and below her, which allows her to more easily detect the movements of an opponent. Tigra's hearing is sufficiently acute as to detect a sound pressure level change from 4 decibels to 6 dB at a range of 40 feet. With her highly developed sense of smell, she can selectively sort through various odors so as to follow a quarry's trail. She can detect subtle alterations in the composition of perspiration that reflect mood or emotions, and is highly sensitive to pheromones.

Tigra is a good hand to hand combatant and pilot. Her senses also afford her impressive tracking skills.

Equipment: Tigra wears a cat's head amulet around her throat which serves as a talisman for her change from feline form to human and vice versa.
Transportation: None known.
Weapons: None known.

Retrieved from "https://marvelcomicsfanon.fandom.com/wiki/Greer_Grant_(Earth-1010)?oldid=255307"
Community content is available under CC-BY-SA unless otherwise noted.