"You know nothing of weapons or the art of war. Until you are one

with your weapon, as I, you will always be defeated..."

-Captain Vibranium to Man of Iron

Grant Rogers (also known as Captain Vibranium to most), is a Medieval superhero born and raised in England.

Grant Rogers was born with a gene mutation that gave him enhanced speed and enhanced strength. He grew up in the poverty ridden streets of England. His mother died giving birth to him, and his father was sent off to war while Grant was sent to live with his insane Grandmother. During his time with his Grandmother, she constantly tried to kill him; believing his mutation to be a curse of Satan.

When his father returned for him, he had been toughened into a strong, durable young man. To take care of his war-crippled father, Grant decided to become a knight, which would see that the Palace pay for his service.

After joining the Royal Guard of King Arnold Vibracus XXIII, Rogers witnessed the stealing of the Royal Vibranium Shield, the symbol of the House of Vibracus. Rogers chased down the thief and took back the Shield. As reward, he was gifted with the privilege of becoming Captain of the Royal Guard and wielding the shield into combat.

The Birth of Captain Vibranium

During an fiery incursion in Scotland, Grant Rogers's Vibranium Shield was permanently melted onto his arm. Prior to this, he retired from the Royal Guard and fell into a life of heroship. The locals referred to him as Captain Vibranium; for he wore armor of the substance and had a shield and sword to match.

When England was attacked by the evil Viking Deity, Loki, Grant Roger's banded together with Damien Stark (the Man of Iron), and the Viking God, Thor, and formed the Stone Avengers. After the Battle of New Rock, the young and beautiful assassin Natalie Romanof, and the skilled archer Clay Barton, joined. Captain Vibranium and the Scarlet Widow flowered a romantic relationship soon after.

This lead to the birth of his first and only child, Annabell "Anna" Rogers. Anna was, too, born with a mutation. Her mutation, however, was much more powerful than her fathers.

When Titan reached Mach 15 during the events of Slayer, he accidentally altered the timeline. This forced the future and the past to merge with each other, teleporting the Stone Avengers from Medieval England, to modern day New York. A battle ensued, in what would become the famous event known as Past vs Present, in which the Stone Avengers battled the New Avengers.

Time in the 21st Century

On Valentine's Day, Mysterio released a strange gas that put all the Avengers into a trance. Captain America spent a night of love with Scarlet Widow, while Captain Vibranium did the same with Black Widow. The following day, the two couples nearly leveled a canyon out of anger.

Anna Rogers, who had transported to the future with her parents, was introduced to the X-Men, where she learned to harness her powers under the tutelage of Professor Charles Xavier. She promised that, when she returned to her time (if she did), that she would form her own team of "X-Men", and help other mutants like her.

Captain Vibranium nearly strangled his daughter when he caught her kissing a young Bobby Drake.

Currently, Captain Vibranium resides with the Stone Avengers in what they call the Cave (located in the Grand Canyon).

Military Training: Due to his time on the Royal Guard, Rogers has adapted a precise level of skill with a sword. His years of training and experience with his unique shield, as well as its physical properties, allow him to accomplish amazing feats with the item. Although he is efficient with proper royal training, Rogers' has become an expert in guriella warfare tactics (though he did not discover the name for it until he was transported to the 21st century). He has also learned assassination and stealth techniques from his wife, Natalie Romanof.

Armor: As Captain Vibranium he wears a knight's suit of armor, which is made of pure Vibranium alloy. The costume also offers a high level of resistance to electric shocks, incendiary attacks, corrosive attacks, and force impacts i.e., falls from 30 meters height. The suit cannot be pierced by normal conventional sharp edged materials like sharp wood, glass, iron, copper and aluminum. The suit also gives some resistance to high temperatures.

Vibranium Shield: Captain Vibranium's only weapon is his shield, a concave disk 2.5 feet in diameter, weighing 12 pounds. It is made of a unique Vibranium-steel alloy that has never been duplicated. The shield was smithed by Royal Blacksmith Jon Castellan for the Vibracus Family. During his forging of the shield, Castellan combined Vibranium with a steel alloy he was working with and created the disc-shaped shield. No one else was able to duplicate the process due to the public's inability to identify a still unknown catalyst that played a role in the metal bonding (an experiment to recreate the process resulted in the creation of Adamantium). The shield was awarded to Captain Vibranium by the Royal Family, after capturing a master thief who had stolen the shield prior. Later on, the shield was permanentley molded into his arm, preventing him from having the ability to throw it.

Source of Paraphernalia: Given to him as reward by the Royal Family of Vibraucs. 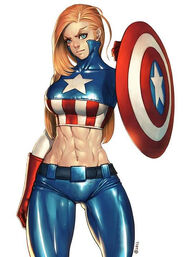 Sarah Rogers (Madame America); An alternate version of Steven and Grant Rogers from the Yesterworld Universe
Add a photo to this gallery
Retrieved from "https://marvelcomicsfanon.fandom.com/wiki/Grant_Rogers_(Guardverse)?oldid=171357"
Community content is available under CC-BY-SA unless otherwise noted.