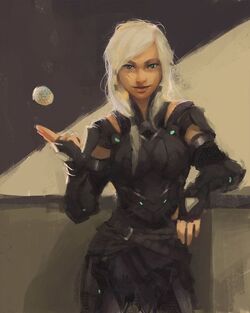 I never pictured myself as much of a hero, but now that I'm here? I'm gonna do everything I can to save the world.

Grace Deacon was born to two loving parents in London just a few years before Apocalypse rose to power. Once his forces discovered her mutant DNA, her hometown was pillaged and her family assassinated by the Horsemen. Grace was then raised in a mutant training center, where she was educated by Mister Sinister.

When she was a teenager, the X-Men staged a raid on the training center and liberated the mutants there, Grace took the opportunity to fight back using her telekinetic powers. She, and several other young mutants, then went with the X-Men back to Krakoa to join their fight against Apocalypse.

Retrieved from "https://marvelcomicsfanon.fandom.com/wiki/Grace_Deacon_(Earth-9999)?oldid=245785"
Community content is available under CC-BY-SA unless otherwise noted.