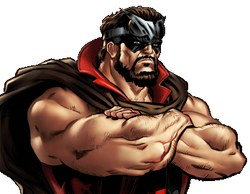 Brown
Unusual Features
Gorgon resembles a human, but with hooves instead of feet.
Status
Citizenship

Careful puny one -- lest you shove just a touch too hard -- and it becomes necessary -- for Gorgon to break you.

Gorgon was a member of the Royal Family of the Inhumans, sent by their one-time leader, Maximus, to find Medusa and return her to Attilan. Gorgon found her outside the Fantastic Four’s Baxter Building and attacked her and the Human Torch, who she had captured to help her escape. He used his powerful legs to climb the side of the building, hurt Mister Fantastic when he reached out to see who it was, and stole their helicopter after kicking their Fantasticar and Pogo Plane, thus disabling their transport. He chased Medusa and the Torch to New York’s State University where he confronted an escaped Dragon Man, who protected Medusa from him. He continued to fight the Dragon Man, then the rest of the Fantastic Four, until the android created enough of a distraction for him to escape to the Inhumans hideout with Medusa.

There, he discovered the Human Torch alongside his cousin, Crystal, who believed Johnny to be a fellow Inhuman. Gorgon and Triton then attacked the Torch until he escaped through the roof to alert the rest of the Fantastic Four. Together, the Inhumans, led by Black Bolt, battled with the four, until Crystal announced that Triton had been taken by the Seeker, who had been sent to bring them all back to Attilan. Black Bolt then commanded Lockjaw to transport them, and they disappeared off the rooftop, with the Torch and Crystal trying to stay together, but being torn apart.

They appeared back in Attilan, where Maximus explained that he had Gorgon bring Medusa back to be his queen. Gorgon apologized and claimed ignorance of his motives. Then, Maximus taunted Black Bolt about his stolen crown until Black Bolt tore it from his hands by force, reclaiming the leadership of the Inhumans. But soon the Fantastic Four appeared, having followed the Seeker back to the refuge, and argued with Black Bolt, telling him that he and the Inhumans should rejoin the human race. While they discussed it, Maximus set off his atmo-gun, with the intention of destroying all the humans on the planet. When it failed to work, as evidenced by the Fantastic Four’s survival, Medusa deduced that it proved the Inhumans were of the same race as humans. This infuriated Maximus, and he reversed his machine, creating a Negative Zone around Attilan that trapped the Inhumans inside, while the Fantastic Four narrowly escaped.

Black Bolt later revealed his secret: that the use of his voice released destructive energy, and he was forced to use it to destroy the barrier surrounding Attilan. The Council of Elders then decreed that the royal family should split up and explore the human world.

Gorgon possesses a variety of superhuman physical attributes as a result of a combination of his unique heritage and exposure to the Terrigen Mist on two separate occasions.

Superhuman Strength: Gorgon is superhumanly strong, more so than most other Inhumans, and was previously capable of lifting approximately 2.5 tons. His current strength since undergoing secondary terregenesis is unrevealed, but the upper limit is presumed to be exponentially higher than it was previously.

Superhuman Speed: Gorgon is capable of running and moving at speeds greater than even the finest human athlete.

Superhuman Stamina: Gorgon's musculature produces less fatigue toxin during physical activity than the musculature of a human. He could previously physically exert himself at peak capacity for several hours before fatigue begins to impair him. His current stamina is unknown, but it takes a liter of tiletmine to keep him unconscious, and this dosage must be given hourly in order to be effective, so his stamina is much higher.

Superhuman Agility: Gorgon's natural agility, balance, and bodily coordination are enhanced to levels that are beyond the natural physical limits of the finest human athlete.

Superhuman Reflexes: Gorgon's reaction time is enhanced to a level that is beyond the natural physical limits of the finest human athlete.

Superhuman Durability: The tissue of Gorgon's body is somewhat harder and more resistant to injury than those of a human being. Gorgon can withstand impact and blunt trauma forces that would cripple or kill a human being and suffer from only mild discomfort. However, Gorgon is not invulnerable and can be injured in ways similar to a human. For instance, he can be hurt by weapons composed of conventional materials.

Regenerative Healing Factor: Gorgon, if injured, is capable of healing somewhat faster and more extensively than a human being can. His recovery time from physical trauma is about twice that of a human.

Kinetic Shockwaves: Gorgon's legs are thickly muscled, allowing him to do massive damage by kicking something or someone, or he can use them to create seismic shocks by stomping the ground with his hooves. As a result, Gorgon can generate shockwaves with a strength of 7.5 on the Richter Scale, or 9.5 if near a fault line.

Gorgon is a formidable hand to hand combatant

Unknown although possibly above 2.5 tons

Like all Inhumans, while being physically superior to humans in most respects, Gorgon's resistance to diseases and recovery time from diseases is slower than that of a human.

Retrieved from "https://marvelcomicsfanon.fandom.com/wiki/Gorgon_Petragon_(Earth-1010)?oldid=255292"
Community content is available under CC-BY-SA unless otherwise noted.