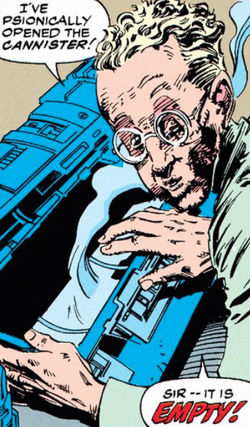 Gordon Lefferts, a mutant and bioresearcher, was an ally of the scientist and enemy of the X-Men, Mr. Sinister. Lefferts had a private lab in Los Angeles, since no pharmaceutical firm would work with him.

At a farmhouse in Nebraska, Gordon Lefferts was to open a special canister for Mr. Sinister. This canister was supposed to contain cell samples of the madman known as Stryfe, but instead it held the Legacy virus. When Lefferts psionically opened the container, he became the first one to be infected with the disease.

Gordon Lefferts died from the Legacy Virus not long after, and was buried in Alaska.

Gordon's death was not depicted on-panel

Retrieved from "https://marvelcomicsfanon.fandom.com/wiki/Gordon_Lefferts_(Earth-1010)?oldid=180233"
Community content is available under CC-BY-SA unless otherwise noted.