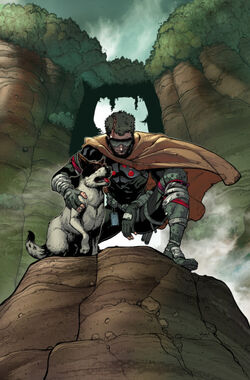 There is nowhere you can hide from me.

Gordon Biblian was born and raised by his distant and unloving parents on Attilan. At the age of 12, he went through Terrigenesis and his eyes were absorbed into his face. He gained the ability to see on a more spiritual level, as well as the power to teleport anywhere in the known universe.

He was quickly brought in for training by the Royal Family, who sought to make use of his abilities. He eventually became a trusted confidant of King Black Bolt and Queen Medusa, who routinely send him to the Earth on missions of reconnaissance and information gathering.

This would eventually bring him into contact with several beings of interest to the Royal Family, such as the Fantastic Four, Nick Fury the Director of S.H.I.E.L.D., and even Uatu the Watcher. When the time came for the Inhumans to fight back against the Inhuman Royal Family, the Reader paired his teleportation abilities with Lockjaw's to carry the team to Hala. When the battle was won, King Black Bolt had sacrificed his life, and the Inhumans had lost their home on Attilan. From there, the Reader pledged his loyalty to Queen Medusa in helping her rebuild the Inhuman civilization somewhere in the cosmos.

Retrieved from "https://marvelcomicsfanon.fandom.com/wiki/Gordon_Biblian_(Earth-101)?oldid=250306"
Community content is available under CC-BY-SA unless otherwise noted.