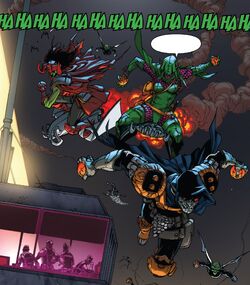 Norman Osborn fell to madness after watching his wife, Emily, be shot by a gangster. Taking the alias of The Goblin, he attempted to control of New York's crime population by creating a gang known as the Goblin Nation, and selling the government sponsored drug, OZ, to force the people under his control.

After his alter ego started to interfere with his personal life, an enraged Goblin his Enforcers to attack the city while simultaneous broadcasting a podcast demanding the city to surrender to him.The Slingers followed his transmission to Osborn Laboratories and attempted to stop him, but Goblin injected himself, transforming into a grotesque monster. Their battle spread out into the streets and The Goblin seemed to gain the upperhand; however, this was just a diversion so that Wraith could give him the anecdote and Jackpot and Spider-Man could take him out.

Retrieved from "https://marvelcomicsfanon.fandom.com/wiki/Goblin_Nation_(Earth-774237)?oldid=192004"
Community content is available under CC-BY-SA unless otherwise noted.