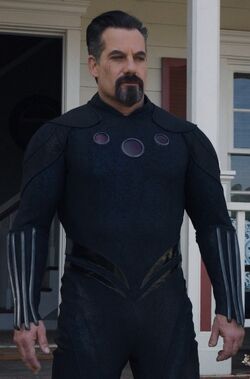 The Destroyer of Worlds
Identity

Earth-101
Base Of Operations
Commandeered Hydra Base
Characteristics
Gender

I have the power to save or destroy the world. What I end up choosing to do is entirely up to you.

Glenn Talbot was an army General who worked under Thaddeus Ross during his hunt for the Hulk. However, Talbot eventually backed off from the hunt when Hulk became an Avenger. He instead dedicated his career to overseeing the secret organization S.H.I.E.L.D. to make sure they didn't overstep their boundaries.

Over the years, he formed very antagonistic relationships with both Nick Fury and Phil Coulson. When S.H.I.E.L.D. discovered Hydra was developing experiments using Gravitonium, Talbot demanded S.H.I.E.L.D. led the military handle it.

They refused, of course, and Talbot led a squad after them during their rad of the Hydra base. He found himself alone in the Gravitonium Chamber, and in an attempt to prevent Hydra from becoming too powerful, he opts to put himself through the process.

He emerges changed, imbued with the ability to manipulate gravity itself. He initially wanted to use his powers to crush Hydra and protect the world, but over time the process started to warp his mind. He began to see himself as the savior of mankind and anyone who oppose him were heretics.

This, of course, led him into conflict with the Avengers. Dubbing himself Graviton, he bested the Avengers in combat, forcing Fury and Coulson to send in the Secret Warriors to subdue him. While Mockingbird, Spider-Woman, and She-Hulk were able to distract him, Quake was successful in injecting herself with a concentrated version of the Extremis formula so that she could blast Graviton out of the Earth's atmosphere. He then froze and cracked in the outer atmosphere, dying.

Retrieved from "https://marvelcomicsfanon.fandom.com/wiki/Glenn_Talbot_(Earth-101)?oldid=248269"
Community content is available under CC-BY-SA unless otherwise noted.