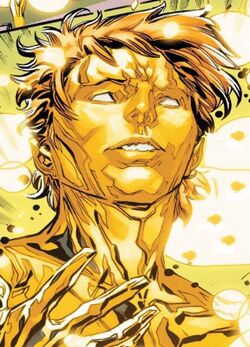 Golden Man, Golden God, The First Traveler, The First Speedster, Embodiment of the
Power Primordial, Savior of the Universe, One with the Universe
Identity

Elders of the Universe (formerly)
Universe

Earth-61615
Base Of Operations
Mobile across the universe
Characteristics
Gender

Similar to most the Elders of the Universe, the origin of the cosmic entity Gilpetperdon, commonly referred to as the Runner by most ancient texts during the modern ages, is mostly lost in the early history of the universe. It is known that he is one of the oldest living beings in the universe. Like among other Elders, he is the survivor of one of the intelligent races that evolved in one of the first galaxies to form after the Big Bang, the cataclysmic event in which the universe was created. However, despite being an Elder of the Universe, the slightly self-centered Gilpetperdon eventually decided to leave the league of his fellow primordial brethren, making up his mind to take on a path of his own and become one of the first ever cosmic travelers across the very young universe as he curiously and willingly explores it, trying to find his own still undiscovered purpose in his early existence without having to consider thinking about his people and the unified primitive established network of benevolent beings.

Approximately twelve billion years in the past (two billion years after the Big Bang), the non-Celestial cosmic entity and primordial archdemon that resides in a pocket nether dimension named Chthon, secretly and tactically wages a great war with his army of darkness and the Allied Empire of Damnation (consisting of the his father Mephisto, the then-current holder of the Satan epithet that was Marduk Kurios, the fallen angel Zadkiel, the mysterious demonic goddess Asteroth, the Cthulhu Mythos, the future Japanese God of Evil Chaos King, a momentarily-possessed Phoenix Force, the future Spirit of Vengeance that was Zarathos, and Blackheart himself after trying to get his father's honor and recognition) against the Conservators of the Cosmos, a democratic council of benevolent, god-like beings who had served as the first guardians and peacekeepers of the young universe, in accordance to the legacy left by a noble sector of Celestials, years before their demises.

The war goes on for the next billion years, which covered most of reality in great darkness due to the slow but progressive forces of Chthon, with the latter seemed like it would last for an eternity. Almost two billion years have passed during the reign of terror inflicted by the Allied Empire of Damnation across the primordial stages of the universe, the conflict was finally won and order was restored by the surging forces of good and ideological supporters of peace (which included Those Who Sit Above in Shadow, the angelic precursors to the Spirits of Vengeance, and the Runner himself), which were different but mutually-allied resistance groups fragmented from the Conservators of the Cosmos since it supposedly fell during the war of darkness that lasted for almost two billion years. Despite the continuous darkness, Gilpetperdon and his persistent allies never gave up on fighting the imperial forces of evil for the brighter future of the cosmos.

One with the Universe

In the fall of the Allied Empire of Damnation and the success of the peacemakers, Gilpetperdon have heroically made an ultimate sacrifice in the last moments of the conflict by destroying the Empire's most powerful weapons which were the Pyramids of the Unknown. As he ran and ran until reaching one of his most fastest speed, Gilpetperdon slowly became one with the universe as the overtly great energy unleashed by the Power Primordial within himself completely cancels out the conversion of the entire universe into anti-matter and other deadly and destructive elements that would completely end reality itself in its young and vulnerable state. In the cosmic runner's sacrifice, Gilpetperdon was deemed as one of the first heroes to ever exist in this universe and despite having to possess a somewhat personal and self-centered ideology at first, he was still able to think about his fellow cosmic beings and the very fate of the universe, who was still seeking for his help, even at times when he wasn't around with the rest of the Elders and the other peacemakers of the universe. Along with his cosmic altruistic deed, the Runner has created a universal balance that will last for the next several billions of years, before another far worse series of cataclysmic events, which was the "Ends of the Earth," would inevitably cause the premature heat death of the universe along with the rebirth of the known multiverse, a great significant event known as Secret Wars.

Billions of years have passed since the universal conflicts of the Dark Ages that has led to the mostly peaceful and progressive creation of the universe, the essence of the Power Primordial itself would later resurface in several forms during the modern era, with most notable beings who were granted by its power of absolute speed, were usually inhabiting the complex but wonderful planet that is Earth. Such Terran speedsters who acquired their same speedy powers through different means but same energy sources were the Beyonder known as the Wonder Worker who resided on Earth since the Great Multiversal Rebellion, the once infamous villain turned anti-hero Thunderbolt that was the Speed Demon, and the famous and beloved Avenger that was Quicksilver.

The Power Primordial: The Runner's body has been imbued with a immeasurable portion of the Power Primordial, which is residual energy left over from the Big Bang that created the current incarnation of the prime reality. This energy manifests itself as cosmic energy that the Runner has spent countless eons channeling for certain purposes, such as granting himself superhuman attributes at various levels, along with other beings whom he deemed truly worthy of his power. The Runner has essentially trained himself over billions of years to channel this energy to grant himself the powers he's wanted and at what amount of level he wants them.

Retrieved from "https://marvelcomicsfanon.fandom.com/wiki/Gilpetperdon_(Earth-61615)?oldid=233370"
Community content is available under CC-BY-SA unless otherwise noted.