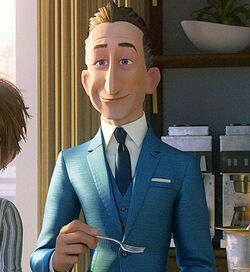 Not only will I make the public fall in love with you, I will have them begging to pay you! All for the simple act of saving their lives.

Gideon Murphy is a very successful advertiser. His talents have been sought far and wide, even Hydra at one point attempted to coerce him into making propaganda for them, but he was rescued by agents of S.H.I.E.L.D.

This experience led to him wishing to devote his talents to helping the world come to accept the presence of heroes. He was eventually approached by Luke Cage and Danny Rand with the offer to work for their new business Heroes for Hire, Inc.

Gideon happily accepted the offer and has made strides helping the public come to accept and embrace the Heroes for Hire. He even agreed to come on full time as their top Public Relations Specialist.

Retrieved from "https://marvelcomicsfanon.fandom.com/wiki/Gideon_Murphy_(Earth-101)?oldid=250616"
Community content is available under CC-BY-SA unless otherwise noted.