Start a Wiki
"Get Your Hexes Right!" is the sixth episode of Assemble!'s Season Two and the twenty-eighth episode overall.

-We will need you two at Hydra Base – S.H.I.E.L.D. deputy Director Maria Hill told Captain America and the Scarlet Witch.

-This isn’t the Widow’s extraction, Phil. – Maria said. –This is a bigger problem here. The Viper was spotted leaving the United States, and there hasn’t been any Masters of Evil attack lately, which leads us to think Baron Zemo is the head of the Hydra now. –

-Bobbi and I saw him at the base last time. – Hawkeye added, walking in.

-And this adds more into the mess. – Hill shook her head.

-We have Simon’s brother in this Hydra soup, right? – Wanda raised her eyebrows at Cap.

-The Reaper, Strucker, Zemo… I seriously wonder who actually the head of the Hydra is… And I certainly hope that by cutting Viper off… We didn’t get two more to take her place… -Rogers said worried.

-Enough talk heroes. – S.H.I.E.L.D. Director Nick Fury said, walking to them. –Barton, Rogers, Maximoff, we need you to go to Hydra Base and inform us who really the head is now. –

-This, Dr. Zola, is the Deathlok!!! – Helmut replied. –Ryker sold me this cyborg in exchange of a huge amount of money, and now he is a member of HYDRA!!! –

-HAIL HYDRA!!! – The Deathlok shouted without Michael Collins wanting to. The Deathlok had control over Collins’ body and he did whatever his owners wanted him to.

-And… Shouldn’t we double try this cyborg? – Zola asked uneasy.

-His body is completely under my control. Even if the human doesn’t want to do certain actions, despite he can have his own thoughts and listen to everything we say, he has no other option but obey. He is no longer owner of his body and actions, we are. This time, it will be foolproof, unlike what happened with Williams. –

-Yes, Dr. Zola. I thought I had Wonder Man’s loyalty by being the only one who had the antidote to his disease, but it went awry and he tried to sacrifice himself to save the Avengers. The Enchantress sent him to Asgard instead of actually sending him to a whole different reality, and that is the reason why we have Wonder Man in the Avengers’ Roster. –

-That is why you trust the Deathlok so much, isn’t it? –

-Naturally. This time, no one will take the Deathlok’s loyalty away! –

-What is this about? – Natasha Romanoff asked walking into the room, controlled by the Grim Reaper.

-Oh, the Black Widow, a pleasure to have you here. – Baron Zemo said. –This is the Deathlok, our own cyborg. With it, it will be the Avengers ending! –

-I can’t believe that is Natasha… - Captain America said, watching the scene from the glass window in the ceiling.

-Neither do I… She’s not friends with Germans. – Barton added.

-Hey, she’s Russian yet she has American citizenship… Aid the Germans is not the last thing we can expect from her. – Wanda shrugged.

-I wouldn’t know. I don’t know her. – The Scarlet Witch defended herself.

-Baron, what is our next movement? – Natasha asked.

-Well, Deathlok should find the Avengers… -

-I am the head of Hydra now, Romanoff. – Zemo said. –Deathlok, find the Avengers. –

Deathlok automatically looked to the glass window and shot a plasma bullet at it, making Captain America, Hawkeye and the Scarlet Witch fall inside the base. Captain America’s shield fell to the ground and as Deathlok aimed at him, Baron Zemo picked the shield up. Zemo threw Rogers’ shield at the Avengers, knocking them down.

-Send these prisoners to their cells, Deathlok. – Zemo ordered.

The Black Widow grabbed Captain America’s shield. –I will take it to the Weapons Room so Doctor Zola can analyze it and create an accurate replica. Hail Hydra. –

Natasha instead climbed to the Base roof, used the Shield to open a hole through the Avengers’ cells’ ceilings and threw Cap’s shield in.

-Wha-What is this?! – Steve shouted looking up.

Natasha put her hands on her hips. –Now go and defeat Zemo, Steve! –

Black Widow jumped inside the cell and fired her Widow’s Bite at the lock.

-Okay, all cleared. – Tasha said, brushing her hair off her shoulder. –Now what? –

-Let me do something with this base. It looks too creepy. – Wanda smirked and used her Hex powers at the base, turning it into a pink version of it. –Worst thing you can do to Hydra… Disrespect it. -

-Now teleport us to the Helicarrier, mind you? – The Black Widow asked the Scarlet Witch.

-Yes, of course double-double spy. – Wanda said and teleported the heroes away to the Helicarrier.

Baron Zemo picking the shield up 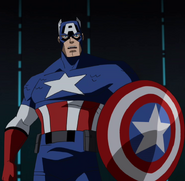 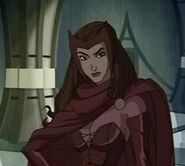 Retrieved from "https://marvelcomicsfanon.fandom.com/wiki/Get_Your_Hexes_Right!_(A!)?oldid=55738"
Community content is available under CC-BY-SA unless otherwise noted.