Start a Wiki
"Get Lucky" is the seventh episode of Assemble!'s Season Three and the fifty-second episode overall.

-Alright guys, - Kitty Pryde faced her Utopia Division teammates after looking out of the window. -We got Daft Punk girl coming here with a helicopter. -

The two Utopia Division members flew to the helicopter, ready to take it down. Domino, seeing herself attacked, pulled out her gun and started shooting at the two X-Men. Lockheed blasted a fire ball at the helicopter, destroying it and forcing Neena to jump down to the Island, luckily dodging every fireball Lockheed fired at her. Once she landed on the island she was surrounded by Kitty, Colossus, Magik, Namor, Cloak, Dagger and Lockheed.

-Not so lucky now, are you? - Magik raised an eyebrow, and her best friend and brother punched the Brotherhood member.

-Too bad I always get lucky. - Neena smirked getting smoke grenades out of her belt and throwing them at the ground. Taking advantage of the situation she kicked Kitty aside and started shooting at her, knocking her out. Her boyfriend Colossus, realizing this, charged at her, but Domino jumped over him without even trying. Piotr ran against a wall and got knocked down next to Katherine. Before Neena could dodge his attack, Namor kicked her chest, pushing her to another side of the island.

Quickly, Cloak and Dagger ran there. Cloak turned every light off, making it completely dark. Domino however wasn't scared.

-You know that if you try to attack me and I shoot I will hit you, despite I can't really see you. - She whispered, holding two guns at the darkness.

Taking advantage of the darkness her boyfriend had just created, Tandy turned every light on and made them even brighter, making it hard for Neena's eyes to get used to it.

Kitty phased through the ground and took both of Domino's guns away and turned them on her.

-You really think you can get out of this? - Pryde smirked.

-Ugh, X-Men are so stupid. - Neena shook her head in disapproval.

-What? - Magik asked, walking towards her best friend with the rest of the team.

-I was never here to attack you! - Domino exclaimed throwing her arms in the air. -In fact, I'm quitting the Brotherhood and came to ask for some shelter here! -

-This is awkward... - Kitty murmured scratching her head.

-Indeed. - Neena nodded. -But I see how it is, you are blind. Now I know why none of you are part of the core team. It was a mistake coming to Utopia. -

-We can be as good as the ones in the Mansion! - Namor protested.

Domino rolled her eyes. -I'm not saying you are weak or that your teamwork is failing. I'm just saying you jump too fast into conclusions. You ended up giving me no choice but attacking you! -

-Of course you should. - Neena crossed her arms over her chest, turning her back to them. -Now I'm gonna need a new helicopter, by the way. -

-I will take you in one of our jets to the X-Mansion. - Namor said firmly. -Before trusting you, I want to try you out with the Professor. -

-Whatever. - Domino shrugged running a hand through her hair getting on board of the jet.

Neena sat in a chair in Xavier's office.

-I see you want to redeem yourself. - Charles said. -And that your intentions are true... -

-Hold on, it doesn't mean I want to be an X-Men or anything. - Domino shook her head. -Just count me in as an ally, or whatever. If you ever need a lucky strike, you know where I am. - She said and in a split second she disappeared through the window.

Meanwhile, in Utopia Island, the telecommunicator rang. As she was the closest one, Tandy picked up.

-Oh, yes! You survived being stabbed in the heart by Loki! -

-Yes, the same. But that's not really the matter... Our problem is a Darkforce user... Marcus Daniels... -

-Oh, no... Blackout... - Tandy whispered, shaking her head while looking up at Cloak who had just gotten inside. 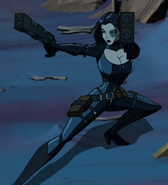 "You know that if you try to attack me and I shoot I will hit you, despite I can't really see you."

"If you ever need a lucky strike, you know where I am."
Add a photo to this gallery

Retrieved from "https://marvelcomicsfanon.fandom.com/wiki/Get_Lucky_(A!)?oldid=57013"
Community content is available under CC-BY-SA unless otherwise noted.