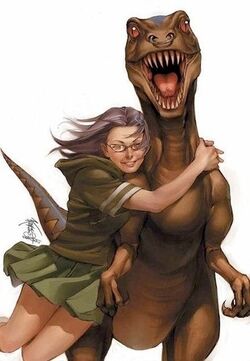 Most people in life don't have great power, and the few that do are almost never responsible with it. The people who have the greatest responsibility are the kids with no power because we're the ones who have to keep everybody in check.

Gert Yorkes' origin is the same as that of her Earth-616's counterpart.

Gertrude Yorkes was born human with no metahuman abilities. However, using the 4-D Time Portico to travel to the future in the 87th century, Gert's parents were able to commission a genetically engineered deinonychus.

Retrieved from "https://marvelcomicsfanon.fandom.com/wiki/Gertrude_Yorkes_(Earth-1010)?oldid=220599"
Community content is available under CC-BY-SA unless otherwise noted.