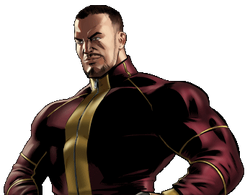 Georges Batroc is a mercenary and the most wanted fugitive of Interpol. He was secretly hired by Nick Fury to hijack a S.H.I.E.L.D. ship so during the rescue mission he could secretly make Black Widow retrieve confidential files.

He fought Captain America in the ship, but was defeated in hand-to-hand combat and knocked unconscious. Before being arrested, he woke up and threw an explosive at Captain America, he used the explosion as a cover to escape. He was later found in a safehouse in Argelia and captured by S.H.I.E.L.D. authorities.

Retrieved from "https://marvelcomicsfanon.fandom.com/wiki/Georges_Batroc_(Earth-1010)?oldid=100045"
Community content is available under CC-BY-SA unless otherwise noted.