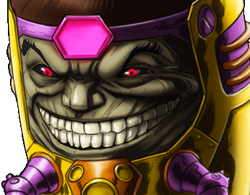 Advanced Idea Mechanics (A.I.M.) agent George Tarleton was engineered by his superiors into an organic computer so they could understand and use the Cosmic Cube. Becoming M.O.D.O.K., Tarleton forgot his former identity and became a psionic powerhouse dedicated to taking over A.I.M. and ruling the world.

Equipment: Doomsday Chair: Due to M.O.D.O.K.'s mutated size, he is no longer capable of unassisted physical movement. M.O.D.O.K.'s body is housed within a technologically advanced device which he refers to as his "Doomsday Chair". The Doomsday Chair, in addition to providing structural support or M.O.D.O.K.'s frame, also magnifies his psionic capabilities to the Nth degree. Though primarily a self-sufficient device, the Doomsday Chair can also be connected to a special energy cradle that provides it with an endless supply of power. Empowering both the chair and the cradle requires massive amounts of energy. Charging it up once caused the entire city of Los Angeles to black out.

M.O.D.O.K.'s humanoid body: A humanoid, giant-sized metallic body, built by more than 100 AIM scientist, that M.O.D.O.K. could operate by entering the empty "headpiece". The body was hard to damage and gave him superhuman strength. It also allowed him to shoot beams of energy from the fingertips, and flight using boot jets. It was big enough to hold Iron Man in one hand.
Transportation: None known.
Weapons: None known.

Retrieved from "https://marvelcomicsfanon.fandom.com/wiki/George_Tarleton_(Earth-1010)?oldid=101908"
Community content is available under CC-BY-SA unless otherwise noted.