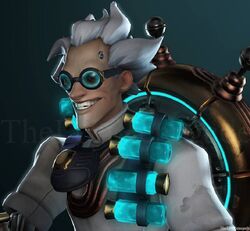 George Tarleton was once one of Stark Industries's most promising scientists. After working on the Arc Reactor Project for years, he was fired by Tony Stark for being too emotionally unstable.

Driven insane by the sudden loss of stability, Tarleton started selling his intelligence to the highest bidder, eventually finding himself working for the Advanced Idea Mechanics. It wouldn't be long until he worked his way up the ranks and was elected Scientist Supreme, working alongside Monica Rappaccini and Aldrich Killian. With all the new resources at his disposal, Tarleton was able to develop an artificial intelligence called the Mental Organism Designed Only for Computing, or MODOC for short.

After leading AIM for years and fighting against the Avengers and the Fantastic Four, the Scientist Supreme came into possession of the Power Stone. He then became obsessed with harnessing the energy into an arsenal which would make him a fortune. He brought a squadron of AIM Drones out to a desert in Nevada to begin testing with the Stone. However, after intervention from the Avengers and the Fantastic Four, he resorted to desperate measures, and set the Stone to detonate. The Avengers then scrambled to save as many inhabitants of the nearby town as possible, while the Thing tried to grab the Stone before the detonation. However, it was too late, and the blast destroyed the entire town, claiming Tarleton's life in the process.