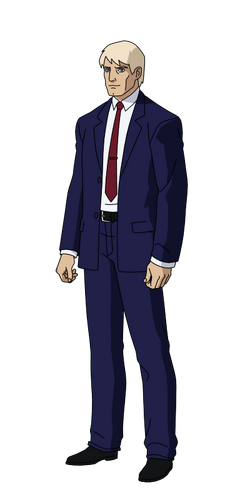 An esteemed police officer for over twenty years, Captain Stacy is the public face of the NYPD who leads the department's investigation into Spider-Man's vigilantism. The only thing Captain Stacy vows to protect more than the city is his family, and particularly his only daughter, Gwen, assistant to Curt Connors in OsCorp and girlfriend of Peter Parker.

Stacy was in charge of the investigations of both Spider-Man and the appearance of a mysterious reptilian creature called the Lizard. When the Lizard tried to use the a OsCorp device to spread a chemical cloud over Manhattan and tranform every human into a lizard-like monster, Spider-Man headed to OsCorp to stop him. The NYPD stopped and captured Spider-Man during his way to OsCorp and Stacy unmasked him, but the vigilante managed to defeat Stacy's unit with his head down until he had to reveal himself as Peter Parker to ask him to let him defeat the Lizard.

George encountered Gwen and she gave him an antidote for Lizard's mutating formula she created at OsCorp and took it to Spider-Man, who was facing the Lizard in the top of the tower. While was Peter changing the formula in the device from the mutating formula to the antidote, Stacy was slowing down and distracting the Lizard. The villain managed to stab Stacy with his claws, although he was later defeated by Peter. Before dying, Stacy forced Peter to promise him not to involve Gwen in his actions as Spider-Man.

Although Peter initially tried to keep Stacy's promise, he eventually summed up the courage to keep dating Gwen. Consequently, however, Peter started to see crazy delusions of Stacy's bloody corpse whenever he thought of her, causing him to question whether or not he should keep the Captain's dying wish.

Retrieved from "https://marvelcomicsfanon.fandom.com/wiki/George_Stacy_(Earth-1010)?oldid=114818"
Community content is available under CC-BY-SA unless otherwise noted.