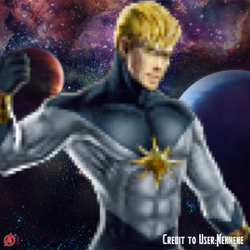 Captain Mar-Vell and Elysius had two children: Genis and Phyla. Once Genis grew up, he was determined to carry on his father's heroic tradition as Legacy. However, his power slowly started corrupting him, making him lose control at times.

Stellar Energy Absorption: Inheriting his father’s energy-based powers, Genis-Vell could absorb stellar energy, giving him enhanced strength and durability, flight, and the ability to fire photonic energy blasts. When Genis' mental state became unstable, he started having trouble holding himself back in regards to his powers, which increased exponentially. He began using his powers in ways he hadn't before.

Cosmic Awareness: Genis later manifested a version of his father’s "Cosmic Awareness". This awareness granted him a sort of omnipresent consciousness that enables him to perceive objects, individuals, and cosmic threats or anything of significance to him anywhere, even if they were cloaked by invisibility or illusion.

However, Genis’s newfound cosmic awareness initially proved unreliable, sometimes feeding him distorted or illusory information. Despite a series of meditative techniques, his cosmic awareness drove him insane, although he thus exhibited greater use of this power, using it to see possible futures, definite futures, and alternate universes, and to project his cosmic awareness into others so that they can see their past, present, or future. He had also used it to communicate with the dead.

Genis once served in the Kree military, although the exact extent of his abilities and skills remain unrevealed.

Originally 15 Tons. Currently, at his normal levels, Genis is capable of lifting over 100 tons.

Equipment: None known.
Transportation: None known.
Weapons: Genis sometimes carries an energy pistol of Kree design. This pistol is powered by the energy his body produces.

Retrieved from "https://marvelcomicsfanon.fandom.com/wiki/Genis-Vell_(Earth-1010)?oldid=115553"
Community content is available under CC-BY-SA unless otherwise noted.