Genesis is an anti-heroine whose first appearance was in Genesis: The Origin.

Astrid is a nice girl but with a slightly bizarre sense of humor. Getting to make humor in inconvenient situations. The fact that she suffers bullying at the institute has given her the ability to laugh at herself.

Since childhood, she has been forced to be independent and for that reason she usually wants to do everything alone.

Astrid is a girl fan of metal, comics and science fiction. And he shows it with his style of dressing. If you do not wear dark clothes, wear T-shirts with comic or science fiction themes. Astrid also has myopia and wears glasses. Always wear your hair with a high bun and bangs fastened.

The Genesis costume was created by Astrid and her friends from the institute's Comics Club. She wears glasses that she used as a costume for a ComicCon because they are graduated for her. In addition, the vest he wears is long on the recommendation of his friends, since one of his skills is flying and wearing a cape.

Origin of his powers

Something very common that the Comics Club does is go to see rains of stars or other phenomena to the mountain. On one of those trips, Astrid was left alone and witnessed the fall of a meteorite (at least she thought it was a meteorite). Out of curiosity he approached him to realize that he seemed to have a perfectly formed, unnatural opening. The interior shone with yellow light and as he approached he saw something moving inside. The impact was such that accidentally hit the meteorite and a yellow mist began to surround it. When he wanted to give an account, the meteorio no longer shone. The next morning he began to feel bad. In a moment his body could be very cold and at the other moment be burning. It was not until later that his powers began to manifest.

She was terrified and could not call any of her relatives. His father is a general in the army and is always busy, his mother always travels the world competing in risky sports and his brother worked in an office in another city. He went to the only friends he had: the Comics Club. They advised him to use that to do good. And they helped him with the suit and with a training that everyone created.

When he had mastered his powers, he began to use them more for personal use than to help the city. She argued that for petty thefts and other petty crimes, her help was not necessary. But if some lunatic tried to destroy the entire city, the country or the planet, then he would intervene.

Upon knowing his existence, S.H.I.E.L.D tried to convince her to work for them but Genesis refused immediately. I did not want anyone to limit her or give her orders. I wanted to go his own way. Then he found someone he did not expect. Alex, his brother. It turned out that if he worked in an office, but not in a normal business. Besides being at the controls, Alex was also a field agent. But still, Genesis refused to work for them.

S.H.I.E.L.D discovered that millions of microbots had joined the body of Astrid, that was the origin of their abilities. They analyzed in "meteorite" and turned out not to be a meteorite, but a transport capsule camouflaged like a rock. They came to the conclusion that these microbots were a prototype of an extraterrestrial weapon that had an accident on Earth.

The true origin of his powers. Its origin is not known exactly. These microbots remain inactive until they have contact with a living being. Then they activate and enter your body sticking to your organs and bones.

The robots have access to all the senses of the host and when that guest touches a natural element of the planet on which it is located, the robots analyze it and allow the guest to control that element, besides materializing in that.

If you try to extract the microbots, they are automatically deactivated and do not work again.

Genesis can control all the natural elements of the earth, that is: Earth, water, air, fire, nature, light and darkness. By being able to control the air, it can fly.

The body of Astrid can materialize in any element including any metal that the microbots could have examined.

The name "Genesis" was posted by the media of his city. Why?

With the powers of Astrid you can create life, and not only because you can grow plants instantly. If not because by combining all the elements properly, you can turn an inaccessible place into a paradise. Genesis, the beginning of life.

- The first time it materialized in water, the clothes she wore trapped her and she fell to the ground. He was in front of his friends so he had to hide to get back to normal and put on his clothes. 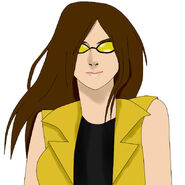 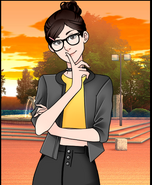 Add a photo to this gallery
Retrieved from "https://marvelcomicsfanon.fandom.com/wiki/Genesis?oldid=249741"
Community content is available under CC-BY-SA unless otherwise noted.