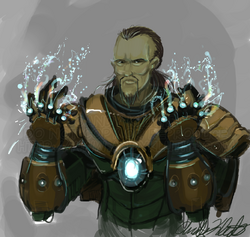 The Master of the Ten Rings
Identity

Earth-101
Base Of Operations
The Valley of Spirits
Characteristics
Gender

The Valley of Spirits
Creators

Bring the pretender to me, and I will execute him myself.

Gene Zhang was once a successful Chinese businessman. However, he got on the bad side of the Hand, who assassinated his wife and ran his business into the ground.

With nothing to his name, Gene began traveling the world after hearing tail of the fabled "Ten Rings". He found himself joining a gang of arms dealers formed around the legend with the sole purpose of locating the Ten Rings. He eventually rose to prominence, dubbing himself the Mandarin, leading the organization from the shadows.

As the years went by, they continued to track down the Rings one by one. This, of course, brought them into conflict with heroes like Iron Man and the Avengers. However, that did not stop the Mandarin from collecting all Ten Makluan Rings, becoming one of the most powerful beings on Earth. However, after using his newfound power to fight off the Avengers, it eventually consumed him, and the overwhelming energy resulted in an implosion, completely obliterating his physical body.

Retrieved from "https://marvelcomicsfanon.fandom.com/wiki/Gene_Zhang_(Earth-101)?oldid=249049"
Community content is available under CC-BY-SA unless otherwise noted.