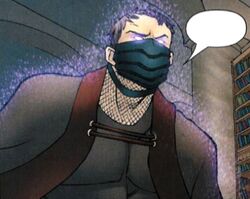 Mutant, The Outcasts (with his spouse)
Identity

My pureblood union notwithstanding, it's extremely rare to encounter more than one mutant with the exact same power. These lowlifes probably just stumbled onto a cursed artifact or...or radioactive meteorite. You know, the usual.

Gene Hayes' origin is the same as that of his Earth-616's counterpart.

Gene possessed mutant powers identical to those of his wife due to the genetic engineering of Dr. Hayes. These powers included:

Retrieved from "https://marvelcomicsfanon.fandom.com/wiki/Gene_Hayes_(Earth-1010)?oldid=220660"
Community content is available under CC-BY-SA unless otherwise noted.