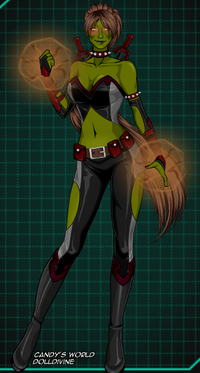 Nova, Lady Nova, One of the Last Human Rockets, Daughter of Gamora
Identity

Gemma is the (surprise) daughter of Gamora, the Deadliest Woman in the Universe, and Richard Rider, Nova Prime of the rebuilt Nova Corps. Though the two had a long, mutual attraction to one another their romance was never anything serious but brought a surprise in Gemma who Gamora carried full term and decided to raise with the Guardians of the Galaxy. Gamora also decided not to tell Rider for a time since they had recently broken up their relationship prior to Gamora being aware of being pregnant and mainly because he had newer responsibilities to be concerned with.

As a result of staying on the Malano, Gemma came to view the rest of the crew as a sort of surrogate family, with Groot and Rocket acting as uncles to her, looking up to Drax as a father figure and Peter being almost like an older brother. All of them played some part in teaching her various skills in combat, collected knowledge, and marksmanship, but generally most of her knowledge came from Gamora in such areas and knowledge. One thing that Peter did seem to teach her though was about human culture, especially because Gemma shared a common trait of being half human like himself. While growing up though, Gemma did find herself caught up in the strange adventures the Guardians tended to find themselves, sometimes ending up helping her surrogate family out of situations as she got older much to the dismay of her mother and Peter's amusement.

Eventually, at the age of nine Gemma would finally meet her father when the Guardians required help from the Nova Corps in dealing with her adoptive Aunt Nebula and her forces once more. By chance, one of those members was Rider himself who helped fend off the woman and her allies and things, for the time being, settling down again. But she had not escaped his notice, especially without how much she resembled Gamora. Inquiring to Gamora about the girl, Gamora made no hesitation to explain who Gemma was which triggered some bickering between the two for a while before things calmed down and after some talking the young girl was taken in by Rider to learn a different way of combat and protection involving the Nova Corps.

From then on, Gemma found herself training among the Nova Corps members and quickly learning how to use the Nova Force. As she grew older, Gemma quickly climbed through the ranks while becoming quite familiar with many members, especially those who had worked with her father for sometime. Gemma also took the chance to learn a bit more about the galaxy through the vast collection of information the Nova Corps headquarters had once again.

Growing bored with remaining in space, Gemma decided to slip out of the Nova Corps headquarters during one of the times the Guardians of the Galaxy were visiting and both her parents were together for once. Using her helmet, Gemma left the planet and traveled across the vast distance of space towards Earth, which took her a few days and ignored the hails on her communicator inside her helmet. Eventually she came to the planet her father originated from, smitten with its beauty from space the moment she arrived into the Milky Way. Without hesitation, the woman began to enter it's atmosphere but not before she was confronted by SHIELD's extraterrestrial division SWORD.

Though taken in to be questioned, it wasn't long before Gemma was able to clear up why she was going to Earth and with some explanation from her father, who she finally contacted, was allowed out of custody. But agent Brand decided to direct her to some specific coordinates in which she would be greeted by others. Once done on SWORD's ship, Gemma headed to the coordinates Brand directed her towards and soon arrived to the newly opened academy, being greeted by Maria Hill and the Avengers Academy Staff.

Gemma is able to lift 1 ton even, estimated to be the average of a Zen Whoberi woman. When augmented by the Nova Force, she can lift little over 3 tons.

Retrieved from "https://marvelcomicsfanon.fandom.com/wiki/Gemma_Rider_(Earth-7194)?oldid=255740"
Community content is available under CC-BY-SA unless otherwise noted.