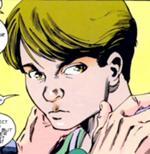 "To live and die in a honorable way is the way of the Knights of Banner."

There was a cult that lived in the California-region called the "Knights of Banner" who worshiped the Hulk of the 20th century and lived by a code of honor. Tired of the state of society, they began experiments with gamma radiation to create a new Hulk which would save the people from their terrible position in life. The enigmatic lifestyle of the Knights attracted L.A. movie studios, which wanted to make a film based on their lifestyle.

One studio in particular, Lotusland Entertainment, sent their ruthless deal-maker John Eisenhart to meet the Knights of Banner and secure the rights to their story. However, the Knights, who were more interested in honor and integrity than Hollywood money, turned him down. However, John didn't take "no" for an answer and tricked a young boy in the Knights, Gawain, to reveal the Knight's secrets to him. Gawain revealed that the Knights were carrying out illegal gamma experiments to recreate the Hulk. John, who had no reservations to play dirty to get what he wanted, reported the Knight's activities. Unexpectedly for John, an armada of police attacked and slaughtered the Knights. John tried to stop them, but the only one who he could save was Gawain. But in the process, the Knight's gamma weapon discharged and John was turned into the Hulk 2099.

Now haunted by the guilt of getting all of the Knights killed, John swore to protect Gawain, the last of the Knights of Banner. However, even that failed when a man/machine named Draco committed a violent corporate takeover of Lotusland. In the process, Gawain was killed. Hulk 2099 dedicated himself to defending the people from monsters like Draco and became a leader in a rebellion against them. After President Victor Von Doom's takeover of America, John stole a gamma device from one of Doom's henchmen in order to keep it from Doom himself. This device was similar to the one that granted John the ability to transform into his Hulk-like form. Draco goes on to inform John that if he doesn't turn the device over to him, he will detonate a massive bomb placed directly on the city's fault line. In the ensuing battle, the bomb detonated and triggered a massive earthquake. The earthquake set off the gamma device that resulted in a massive explosion, laying waste to the city. John emerged from the rubble, mutated even more so by the radiation emitted from the device. His mutation stabilized and he returned to his original form just prior to S.H.I.E.L.D. agents arrived in the region. While battling them, John seemingly perished.

Retrieved from "https://marvelcomicsfanon.fandom.com/wiki/Gawain_(Earth-928.2)?oldid=172925"
Community content is available under CC-BY-SA unless otherwise noted.