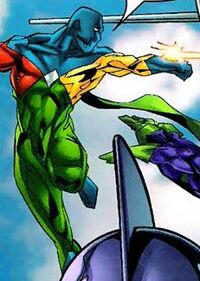 I still don't think you deserve to be a Centurion, Rider!

Garthan Saal was a Denarian of the Nova Corps. He was assigned to mentor Rhomann Dey's successor, Richard Rider. After an attack on Xandar, Rider was promoted to Centurion. He went mad with jealousy and attempted to kill his former student, but was defeated by Rider instead. He was subsequently kicked out of the corps. During his exile, he found the Power Prism. Binding with the weapon, he became Doctor Spectrum occasionally using his new power to take revenge on the Nova Corps.

Retrieved from "https://marvelcomicsfanon.fandom.com/wiki/Garthan_Saal_(Earth-32)?oldid=231333"
Community content is available under CC-BY-SA unless otherwise noted.