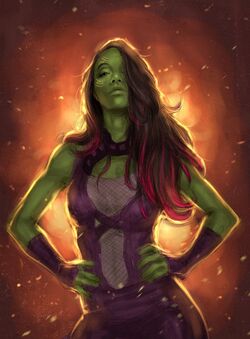 The Deadliest Woman in the Galaxy, The Titan Killer
Identity

Everything I hate about myself came from him. I will kill him, and then I will purge myself of him.

Born on the poverty-stricken planet of Zen-Whoberi, Gamora always went to bed hungry so that her little siblings could eat what little food their family had. Later, when Gamora was only about 7-years-old, her home world was visited by Thanos and the Black Order, who sought to pillage the world for what little resources it had and extinguish the remaining population.

After getting separated from her family, Gamora fought against the Chitauri Soldiers who tried to drag her into a firing range. Her tenacity caught the attention of Thanos, who took her off to the side and taught her about balance as her people were murdered. He then took her with him to raise her in Sanctuary.

She was then trained alongside her fellow "sisters", Nebula and Proxima Midnight. Gamora was a quick study and easily became Thanos's favorite, despite the fact that she was only doing whatever she thought was necessary for her own survival.

After Thanos began expanding his empire and forming alliance with rogue Kree factions and Asgardian exiles, she began to see an opportunity for escape. She and Nebula were sent on a mission to ravage a small refugee ship while it was under the process of being attacked by Dark Elves. As Nebula engaged in the mission and was distracted by combat, Gamora attempted to fake her death and leave the scene in an escape pod to fulfill her plan of finding and pawning an Infinity Stone.

However, before this plan could be completed, the Black Order lieutenant Corvus Glaive put a bounty on her head that was accepted by a crew called the Guardians of the Galaxy. Just while Gamora was on track for locating the Mind Stone, she was attacked by the Guardians.

Capable of holding each of them off, she explained her situation to their leader, Star-Lord, who agreed to help her escape from Thanos. She then became a member of the Guardians, and they all slowly begin to teach each other to be good people. Gamora and Star-Lord would even go on to fall in love, despite constant threats upon his life from Thanos.

Eventually, Gamora was abducted by Thanos due to her knowledge concerning the Soul Stone. While the Avengers and the Guardians raced to save her, they proved to be too late, as Thanos and Gamora made it to Vormir, where he learned that he must sacrifice what he loved in order to claim the Stone. Gamora mocked him, saying he loves nothing, only for a teary-eyed Thanos to toss her off the cliff, being rewarded with the Stone in return.

[[Category: In a Relationship with Peter Quill Characters]]

Retrieved from "https://marvelcomicsfanon.fandom.com/wiki/Gamora_Zen-Whoberi_(Earth-101)?oldid=250770"
Community content is available under CC-BY-SA unless otherwise noted.