Marvel Fanon
Register
Don't have an account?
Sign In
Advertisement
in: Characters, Templated Articles, No Dual Identity,
and 24 more 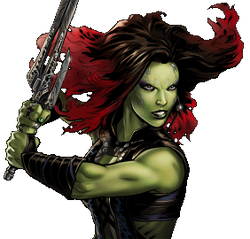 Green Assassin Lady, Most Dangerous Woman in the Universe
Identity

Gamora was raised from childhood by Thanos and Ronan to be a galaxy-class killer. She became rivals with Nebula, but it was clear to her that she was better than Nebula. She liked to fight rough and be hard on Nebula a lot, she once threw Nebula off a very high tree trunk (which almost led to Nebula's early death). However, she also sometimes acted as a friend and mentor to Nebula.

As an adult, and still serving Thanos, she and Nebula were tasked to find the Orb. Nebula went to the Praxius IX to search the Cloud Tombs, while Gamora came in later as "backup". When Gamora arrived at the tombs, she found Nebula stuck in a net, and the Orb nowhere to be seen. Thanos told her to leave Nebula, but before Gamora left, she gave Nebula a knife.

Sometime later, Gamora started to resent working for Thanos and Ronan. Having made a reputation for herself as an assassin, she came to the attention of Taneleer Tivan, also known as the "Collector", who hired her to retrieve the orb for him. Gamora hesitantly accepted, and the Collector told her that the orb would be at the Temple Vault of Morag.

Her chance came when she was assigned by Ronan to retrieve the orb from an outlaw named Peter Quill who she intercepted on Xandar. Her attempt to snatch the orb from him resulted in a chaotic confrontation when Quill fought back with unexpected tenacity, and then bounty hunters Rocket and Groot got involved trying to collect a bounty on Peter Quill's head. The three-way fight attracted the attention of the Nova Corps, and all four were captured and imprisoned in the Kyln.

Many prisoners in the Kyln wanted to kill Gamora for they blamed her for the many lives Ronan had taken, and on the first night, a group of prisoners took her to the shower rooms to kill her. The would-be lynch mob was interrupted by an inmate by the name of Drax who demanded the right to kill her because Thanos had killed Drax's family and Gamora was guilty by association. Quill was next to interrupt the stand off, and managed to convince Drax to stay his hand for the time being. Gamora was confused as to why Quill would save her, but then he explained later on that once Rocket busted them out of prison, she'd have to take them to the third party to sell the orb, and the profit would be split between her, Quill, Rocket, and Groot.

The next day, Quill, Gamora, and Rocket planned their escape. While Rocket was explaining his plan, Groot stole the battery they needed putting their escape plan unexpectedly into motion. Fighting their way into the control booth, they were joined by Drax before Rocket gained full control over the facility and flew them clear in the detached control booth. When Peter excused himself to go back for something he had left behind, Gamora was insistent that they leave without him, but then she discovered that he had taken the Orb of Morag with him forcing her to accept delaying their escape. She was relieved when he returned shortly thereafter but was dismayed when she learned that all he had gone back for was a music player.

The group flew to Knowhere, the severed head of an ancient celestial being which had been turned into a mining colony, so Gamora could sell the Orb of Morag to the Collector. While waiting for the buyer, Quill talked with Gamora, trying seducing her while introducing her to music and weaving a tale of heroism about Kevin Bacon, but Gamora drew a knife on him to end his advances. Then they saw Rocket, Groot and Drax getting into a bar fight, so they went to halt the fight, only to have Drax leave, angry and drunk, so it was only Gamora, Quill, Rocket and Groot who went to see the Collector.

When they reached the Collector Gamora made the introductions, and they handed over the orb. The Collector told them that the orb contained one of the Infinity Stones, powerful gems that could destroy entire planets. Unlocking the orb for them to see, the Collector continued his rendition of the stone's history, only to be interrupted by his assistant who reached for the Infinity Stone in an attempt to use its power to escape the Collector's control. There was no way she could handle that level of unrestrained power, however, and she along with much of the room were consumed in a brilliant explosion of the stone's power. Gamora had taken cover from the blast and found that her other misfit acquaintances had likewise survived. Rocket insisted that they hand the orb over to Ronan, but equally fearful of its power Gamora proposed an alternative strategy to turn it over to the Nova Corps, reasoning that such power should not be in any hands, especially Ronan's.

The argument over what do with the relic was cut short by the arrival of Ronan and Nebula. Gamora, Quill, and Rocket, immediately took advantage of some nearby mining pods to fight off their attackers although the mining pods were critically outgunned by the superior firepower of the Necrocraft fighters that Nebula and Ronan's pilots were flying. After flying clear of Knowhere, Gamora came under direct attack from her sister when Nebula determined it was she who was making off with the coveted Infinity Stone. Her mining pod was quickly blasted apart whereupon Nebula made off with the orb and left Gamora to die in the vacuum of space.

Gamora awoke on a Ravager craft a short time later and learned that Quill had risked his life to save her, which had landed them both in jeopardy as prisoners of Yondu Udonta and his Ravagers. The Ravagers were deep in discussion of whether or not to kill the pair when Quill began talking his way out of the situation by offering the Orb of Morag in a trade if the Ravagers helped them wrest it from Ronan's grasp. Just then Rocket, Groot and Drax aboard the comparatively small Milano launched an ineffectual attack and threatened to destroy the much larger Ravager ship, but Quill talked them down and told them he had a plan. The plan as it turned out proved to be just hollow rhetoric, but as they debated their predicament they each came around to the conclusion that they had to retrieve the orb and save the galaxy.

Upon arriving at Xandar, Peter, Groot, Gamora, and Drax, set out on the Milano to breach the hull of the Dark Aster and affect a direct attack against Ronan, while Rocket, Yondu and the Ravagers provided air cover against Ronan's Necrocraft fighters outside. The Milano was destroyed upon entry to the Dark Aster, but Gamora and the others were able to proceed with their objective unscathed. Nebula got in their path at one point only to be blasted out of the way by Drax. This didn't stop her however, and the task fell to Gamora to fight her off so she could access door controls that would open the way to Ronan. She eventually pushed Nebula out a breach in the hull of the Dark Aster, and as Nebula hung dangling from the ship she offered her hand to assist, Nebula rejected the offer and fell.

When Gamora joined the others in Ronan's chamber she found that he was now fully empowered by the Infinity Stone bonded to his hammer and was gaining the upper hand. All seemed lost until Rocket crashed his borrowed ship into the Dark Aster, causing Ronan's ship to fall. The crew of the Milano would have all died had it not been for Groot weaving a protective shield of vines around them, sacrificing himself to save the others.

Ronan also survived and informed the crowd gathering near the wreckage of the Dark Aster that he would purify the planet. However, Quill distracted him by challenging him to a dance off while Rocket hastily assembled a powerful weapon from the remains of the Hadron Enforcer. Completely bewildered by Peter's antics, Ronan was caught completely by surprise when Drax blasted him with Rocket's weapon, and while it had no appreciable impact on Ronan itself it did knock the Infinity free of the hammer. Quill reached the airborne relic first, and upon grabbing hold its power began to overwhelm him. Gamora stepped in to share the burden, followed presently by Drax and Rocket. Together the four of them were able to withstand the power of the stone, at least long enough for Peter to secure it in its container.

Yondu arrived to claim the orb shortly thereafter, and despite Gamora's misgivings Quill handed it over. After Yondu's departure Quill then revealed that he had given Yondu a fake. In the aftermath of the battle, the team now dubbed the "Guardians of the Galaxy" was congratulated by Nova Prime and Rhomann Dey, and their criminal records were expunged. The team boarded the new Milano, a gift from the Nova Corps. Quill asked the team what they'd want to do next, and Gamora told him that they'd follow his lead.

Weapons: Gamora uses a number of weapons. Currently she wields the Godslayer.