Start a Wiki
"Gamma Radiation" is the ninth episode of Assemble!'s Season Two and the thirty-first episode overall.

-So we can actually trust the Red Hulk? – Dr. Banner asked.

-Anytime. Oh and I would like you to come to my newest Gamma experiment Bruce. –

-Well, I don’t think it could get any worse than this, so there’s basically no risk. – Bruce shrugged.

-No, of course not. – Banner shook his head sternly.

-I am not getting injured! –

-That’s what I thought back then, and look at me now. –

-Bruce is right, Richard. – Leonard said. –Anywho, I have to go get everything ready. Jennifer is coming too. –

-What is she doing there? – Bruce asked.

-Well, I invited her. It will be a nice reunion. – Doc Samson answered and left the Mansion.

As “Thunderbolt” Ross got out of the room, Bruce got angry just by the sight of him and Hulked up, ready to attack him. Anyway, he was stopped by Rick who stood on his way.

-That Ross was committed. – Hulk said, transforming into Banner again.

-General Ross… - Captain America said walking into the room with Iron Man. –Doctor Samson gave his report and we have to say… Welcome to the Avengers. –

-I will go to Doctor Samson’s experiment now, he’s counting on me. Also, my cousin is there so I can’t skip. – Bruce said getting on a Quinjet. –And no Rick, you can’t go. –

After making sure everything was ready, Dr. Banner flew to Culver University in Virginia, where he found his cousin Jennifer Walters (aka She-Hulk) and Doc Samson, who was presenting the whole experiment.

When he shot his Gamma ray, it reflected on a mirror and went directly to Bruce Banner, who was sitting in the audience. Suddenly, Rick Jones jumped in the way of the Gamma ray, shooting him.

-Oh my god! – Jennifer whispered in horror, as Bruce and Doc Samson came to aid the teenager.

-Bruce… Abomination… - Rick said pointing at the bleachers, before passing away. Bruce, seeing Abomination right where Jones pointed at, he Hulked up and destroyed the bleachers with his bare hands, as Doctor Samson got everyone out of the laboratory and Jennifer tried to wake Rick up.

Hulk and Abomination engaged in a giants’ fight, until Blonsky realized Banner’s true weakness was Rick Jones. Emil jumped and right when he was about to hit Rick Jones, he transformed himself into a blue Gamma giant, similar to Abomination who stopped the attack with his fists.

-Wow… Now I can say I have seen everything. – She-Hulk whispered.

Hulk, A-Bomb and She-Hulk fought Abomination and Banner pushed him out of the University and threw him far away.

-I’ll drive you two to the Avengers Mansion. – She-Hulk said jumping on the Quinjet, and the three Gamma giants flew back to New York. 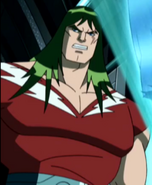 Hulk destroyed the bleachers with his bare hands

Hulk, A-Bomb and She-Hulk vs Abomination

Hulk, She-Hulk and A-Bomb
Add a photo to this gallery

Retrieved from "https://marvelcomicsfanon.fandom.com/wiki/Gamma_Radiation_(A!)?oldid=55741"
Community content is available under CC-BY-SA unless otherwise noted.