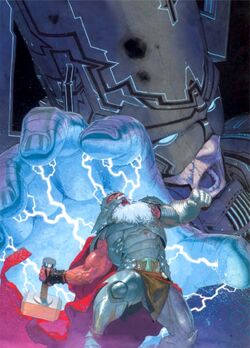 Earth-61616
Base Of Operations
Worldship (aka Taa II); generally mobile throughout the universe via his spherical starship in search of suitable planets to consume.
Characteristics
Gender

You dare stand in the way of The Devourer, Asgardian?

-- A Herald of Galactus

Before the years of Ultron Revolution, Galactus seemed to have the same history with his Earth-61615 counterpart, in which he became the cosmic-consuming, universal Devourer of Worlds all his new life as a celestial-like being, including his encounters with the Fantastic Four. However, this reality's fate had diverged from its prime when Ultron started an all-out war against humanity and those who dares to oppose him and his ideologies on Earth. While Galactus' history of origin was mostly the same and left unaffected due to him not being a denizen of Earth, everything changed when he encountered the time-hopping adventurer known as the Iron Lad, who went into future, specifically the 40th Century, to look for answers and guidance on how to prevent the threat of Ultron from lasting any longer.

At first, Iron Lad had mysteriously returned to the dystopian reality as Kang, after he tried to look for answers in the future, but fails in doing so when he saw that the future fate of this Earth's reality was actually to be recklessly consumed by the Devourer of Worlds, Galactus, instead of falling at the hands of Ultron. In response to this revelation, Kang tried to act proactively and decides to lure the present day Galactus out of the Earth to save it at all costs, reluctantly but successful ending his mission by leading him to all the remaining planets in the Nine Realms, starting to be dangerous realm of Jotunheim. To and extent, it was a determined and utilitarian Kang who actually communicated with the his Heralds and was revealed to be the one who bargained Galactus the offer to consume any other planet from the Nine Realms instead of his home Earth by threatening to erase the cosmic being from existence.

In consequence to Kang's mission of saving Earth, Galactus devours Jotunheim instead with the help of his loyal Heralds, destroying the latter and subsequently decimating all of the planet's population, and as well as Loki, the Asgardian God of Mischief. Along with it, Galactus was able to enter the wormhole summoned by King Thor's daughter, Torunn, from the other side of Asgard's Bifrost, all to save Thor's son and her half-brother, Modi out of Jotunheim. After Modi's arrival on Asgard, immediately follows by Galactus, who unintentionally made the prophecy of Ragnarök come true. In the end, the realm of Asgard was destroyed, but half its people still survived as nomads in the cosmos, with King Thor actually being the one responsible for destroying the Asgard, preferring to destroy the realm itself at the hands of his own powers, rather than letting it be consumed by the cosmic entity. At the cost of his people's great land being blown into smithereens, Thor had to completely fulfill the prophecy of Ragnarök, and Galactus was the cause of it.

Retrieved from "https://marvelcomicsfanon.fandom.com/wiki/Galan_(Earth-61616)?oldid=266707"
Community content is available under CC-BY-SA unless otherwise noted.