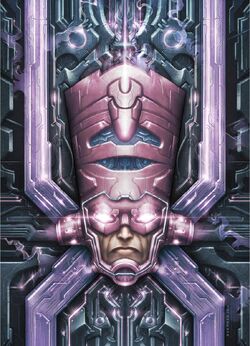 Everyone... I'm afraid that change is indeed inevitable, and unfortunately, so is Galactus...

Galactus is the infamous "Devourer of Worlds" across the universe, due to the fact that his powers are nearly omnipotent. He has appointed a number of entities as his Heralds, imbuing them with the Power Cosmic. He uses energy from the core of planets and other universal sources to sustain himself. It is said for millions of years that Galactus and his heralds would travel across the cosmos farming planets for their master to consume. A herald would be sent to a suitable planet or any other celestial body and implant Galactus' world engines dubbed as Catalyst Pods to convert a planet into energy to suit Galactus' consumption needs.

Before the Invasion, Galactus seemed to have the same history with his Earth-61615 counterpart, wherein he was defeated by the Fantastic Four and his former herald Silver Surfer who banished him into the darkest regions of space using the Ultimate Nullifier, up until the moment anti-heroic Terran A.I. known as Ultron was able to defeat Loki in the end of the Chitauri Conflict by destroying the Tesseract, which contained the Space Stone within it, his ultimate actions costed the the fabric of space to be broken in the process, thus causing a chaotic metaphysical fracture in a universal scale, where the structures of numerous cosmic beings were altered due to several cosmic rays emitted by the destruction of the Space Stone as those rays began to spread throughout the deeper regions of the universe.

Unfortunately, Galactus was one of these powerful beings who coincidentally absorbed half the rays during his seemingly endless travel across the cosmos in his attempt to return back to the Milky Way Galaxy, specifically Earth, effectively mutating his abilities and physiology to a higher level, surprisingly far more advanced than most of the ancient Celestials and almost as powerful as the all-father Beyonders. As a result to this fateful instance, Galactus became the most dangerous and one of the most powerful celestial entity in this universe, in his lifetime. In his new upgraded form, Galactus began to use his new heightened abilities to travel across different dimensions in order to devour new celestial bodies and recruit more powerful beings as his new heralds, eventually embarking his new conquest to fragment the remaining of the Infinity Stones into pieces and absorb its energy, like he did with the Space Stone's emitted rays.

For the next several years, the cosmically empowered Galactus was able to easily gather his new Heralds from different planets throughout every dimension he visited, improving his already menacing image and reputation in the universe thanks to his powerful servants, who varied from former sorcerers from the diabolical Dark Dimension to previously unborn Eternals found in desolated planets, which Galactus would successfully save from death and grow them up to be his loyal heralds in only a span of two years. As his army of heralds continue to grow in strength and numbers, Galactus devoured approximately two million astronomical bodies for the next two Earth years, causing extinction-level events of countless lifeforms who previously inhabited the following astronomical bodies that Galactus has now vanquished. Among these casualties also involved the Silver Surfer after Galactus decided to "revisit" Zenn-La one last time, a great tragedy that ended with the Surfer's demise and his home's destruction. With that amount of cosmic energy feeding him, the godly being was truly satisfied with his nutritious accomplishments, only to realize that his full had slowly costed him his own ability to move his ginormous celestial body, rendering Galactus to appear more as a bloated floating cosmic being as time passes.

Initially fearing that this surging symptom might eventual cause his downfall, the arrogant Galactus ignored his heralds concern towards him, until one fateful day proved that he should've taken his cosmic feeding spree quite slowly. While trying to devour the Earth once more by using the Baxter Building's teleportation device as a gateway to easily reach the planet all the way from where he was at the time, a million light years away from Earth, Galactus' usage of his new powers continuously created a powerful energy surge even the Baxter Building's tech could have detected despite Galactus distance from Earth, warning the Fantastic Four themselves of his plan to ravage their planet once again. Unbeknownst to Galactus while him and his Heralds were on their way to Earth, the heroic four successfully trapped them within the realm of the Negative Zone using the Baxter's teleportation device, moments before the world-devourer could've ever reached the Milky Way Galaxy.

Using his technopathic ability to manipulate the Baxter's interdimensional portal to suck the Earth into the Negative Zone for the sake of easing his mission, also disintegrating the Earth's matter into energy for the planet so he could consume it. But the Fantastic Four: Mister Fantastic, Invisible Woman, the Thing, and the Human Torch entered the portal and confront him on the Negative Zone's Annihilation World, home to the infamous Annihilus, before closing the portal in time from the Baxter to prevent Galactus from ever using it to enter the planet. The four then attacked the Devourer of Worlds, only for the latter to send his battalion of heralds to distract them while he makes a way to reactivate their portal. Thankfully, the four was able to get situational help from their other enemies, Annihilus himself and his Annihilation Wave, who also proceeded to combat the Heralds for the sake of protecting their homeworld.

After a long battle, Reed Richards finally activates the Ultimate Nullifier against a enormously slow Galactus, which weakened him further yet angered him at the same time. Much to Galactus' fury, he tried to obliterate Reed Richards with a powerful wave of energy, only for Johnny Storm to save his teammate and brother-in-law by letting himself get in his way, preventing Reed to be disintegrated. Thought to have been easily killed by Galactus, the Human Torch was actually charged by the blast that hit him, converting the heat blast into his own powers, although Johnny realized that having himself overloaded with such energy, he knew that those moments would be his last. As he thought, Johnny said his goodbyes to his teammates, the very people he also thought of as his family, before making the ultimate sacrifice to take down Galactus with all his might and power. However, seconds before Human Torch could have released his nuclear-like blast at Galactus's face, a few of the latter's surviving Heralds were able to evade both the Annihilation Wave and the heroes and went towards Johnny, tackling him before he could've fly towards their master.

The Human Torch tried fighting off the Heralds only to be overwhelmed by the amount of his adversaries, causing the unstable hero to explode violently due to uncontrollable pressure, but taking those Heralds with him instead of Galactus, which Johnny intends to finish off. Because of this, a guilty Mister Fantastic faltered to see his brother-in-law go too soon, and attempted to single-handedly kill Galactus within Annihilation World in a fit of rage as his last resort using the now fully-activated Ultimate Nullifier. Mister Fantastic finally used the Ultimate Nullifier at the lone Galactus, slowly disintegrating the cosmic being into nothingness as Richards wills the device to kill him once and for all.

Survival in the Negative Zone

Unfortunate for Reed Richards, the four's final attempt to end Galactus' reign was once again interrupted after Annihilus tried to take the Nullifier from Richards for himself, unintentionally saving Galactus from permanent death in the form of his own head, the only thing that survived after getting disintegrated by the Ultimate Nullifier. In the aftermath of Galactus' apparent death, Annihilus' attempt of stealing the Nullifier from Richards only resulted in failure, along with Richards, Annihilus and the rest of Annihilation World being disintegrated out of existence since Mister Fantastic failed to deactivate the universal weapon in time. Fortunate for Richards, he was able to forcibly suck both Sue Storm and Ben Grimm into the portal back to Earth before closing it for good while Annihilation World gets decimated by the unstable Ultimate Nullifier.

Unknown to everyone else on Earth who knew Galactus' existence and assumed he died, the latter was revealed to have somewhat survived since his "inactive" head was salvaged by Baluurian pirates days after Annihilation World was destroyed. Galactus' head was then delivered by the pirates back to their homeworld, Baluur, wherein its ruler Blastaar claimed the enormous head as is own property, planning to use it for his own self-interests. For the next few months in the Negative Zone's complex standardized time zone, Blastaar commanded the most intelligent minds of his empire to work on using solely Baluurian technology, something that was considered to be mostly useless in the positive universe, but at the same time it was one of the most advanced form of technology there ever was in the negative universe.

Nevertheless, the optimistic yet aggressive Blastaar continued ordering his scientific underlings to resurrect the Devourer of Worlds with antimatter energy with whatever resources they have, otherwise they would be mercilessly and unhesitatingly executed by either Blastaar himself or his armed soldiers right on the spot of the laboratory where they were working on the dormant Galactus head, whatever it takes. Another month has passed, and one dedicated scientist was able to miraculously figure out the procedure in finally reawakening Galactus' consciousness with the use of of an antimatter-matter converter engine. For the very first time in a while, Galactus has opened his eyes once more, still paralyzed though finally reawakened. Sensing a new set of powers emerging within him due to the antimatter upgrade, Galactus was able to easily harness these powers by channeling all the energy around him as he successfully controls the mind of the scientist to his very will. Starting from that point, the tables have already turned, and unbeknownst to Blastaar and the rest of the residents of the Negative Zone, they are going to face their greatest doom.

Power Cosmic Physiology: Galactus possesses the immeasurable Power Cosmic and is one of the most powerful beings in the Universe, having near-limitless godlike powers. He was once referred to as "The Most Awesome Living Entity in the Cosmos" by several heroes, villains, and even other cosmic beings or cosmic entities across the universe. Galactus' newly-gained powers are the result of having absorbed the different energies emitted by the Space Stone during its destruction on Earth, gaining almost unlimited cosmic powers in the process, matching his new powers more powerful than ancient Celestials and almost as powerful as the all-father Beyonders.

Retrieved from "https://marvelcomicsfanon.fandom.com/wiki/Galan_(Earth-61615.8)?oldid=254287"
Community content is available under CC-BY-SA unless otherwise noted.