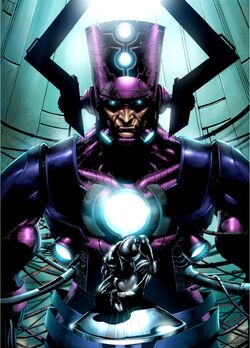 Earth-61615
Base Of Operations
Worldship (aka Taa II); though he is generally mobile throughout the universe via his spherical starship in search of suitable planets to consume.
Characteristics
Gender

I am the inevitable. I am... Destiny. I am Galactus and I hunger.

Galactus is the sole survivor of a universe that existed prior to the current universe. Originally Galactus was a humanoid named Galan, who was born on the planet Taa, a paradise-like world whose civilization is said to have been the most advanced of any of the known universe of that time.

However, this universe was in its final stages of collapse. Originally, like all universes in the Multiverse, this universe had been a "Cosmic Egg," a primal sphere of disorganized, dense, compact primordial matter. The sphere underwent a "Big Bang," an explosion that hurled the matter outwards, where much of it eventually condensed into stars and planets. This universe expanded in size for billions of years, and then contracted, undergoing a "crunch" over the following billions of years. All of the matter of that universe was plunging towards a central point, where it was collapsing into a new "Cosmic Egg."

Taa's civilization was one of the last still in existence. Lethal radiation caused by the "Big Crunch" this universe was experiencing was wiping out all life across the universe. Galan, a space explorer, was dispatched to travel through the cosmos to find a means of saving Taa, but he found none. The radiation eventually killed off all but a tiny fraction of the population of Taa. Knowing their deaths were inevitable, Galan proposed to the remaining survivors that they die gloriously by piloting one of their starships directly into the heart of the "Cosmic Egg." As the starship containing Galan and his fellow survivors approached the focal point of the Big Crunch, the heat and radiation killed all the passengers except Galan, who strangely found himself filled with new arising energy.

Everyone else on the ship disintegrated and that's when a cosmic being calling itself the "Sentience of the Universe" told him they both must merge in order to survive the end of the universe. The being combined with Galan and became part of the new Universe as a Cosmic Egg. The vessel's bioreactor then shuts down, causing for it to detonate and explode, destroying the entire ship, before it collapses into thin air during the Big Crunch but Galan still survives when he and the Sentience was forged into one cosmic entity, before going into a state when they were slowly being covered in a cocoon-like structure caused by the energy released by the Cosmic Egg. Galan, who now became a single cosmic being was created along with Death, Eternity, Beyonders, Celestials, and the rest of the cosmic embodiments of the new universe. He was still intact inside the "Cosmic Cocoon" and remained there in suspended animation for billions of years, before the cocoon itself ruptures, causing it to burst during the birth of the new universe, after the Big Bang event. There emerges the rebirth of a new cosmic being that was once Galan, who was now known as Galactus by his fellow superior and inferior, cosmic embodiments.

As a newly-born cosmic primordial being during the early universe, he gained an all-powerful energy granted by the Power Cosmic, giving him nearly omnipotent powers and abilities. Eventually, he started feeling the lingering senses only felt by himself that would be later known as the "Cosmic Hunger," in which by instinct he travels to a nearby planet and would go on to devour it. He eventually would go on traveling the entire cosmos, devouring constant planets, earning him the infamous title that was the "Devourer of Worlds." He has appointed a number of entities as his Heralds, imbuing them with the Power Cosmic. He uses all of the valuable energy from the core of planets and universal sources in order to sustain himself.

Approximately twelve billion years in the past (two billion years after the Big Bang), the non-Celestial cosmic entity and primordial archdemon that resides in a pocket nether dimension named Chthon, secretly and tactically wages a great war with his army of darkness and the Allied Empire of Damnation against the Conservators of the Cosmos, a democratic council of benevolent, god-like beings who had willingly served as the first guardians and peacekeepers of the young universe, in accordance to the legacy left by a noble sector of Celestials, years before their eventual demises.

The war goes on for the next billion years, which covered most of reality in great darkness due to the slow but progressive forces of Chthon, with the latter seemed like it would last for an eternity. Almost two billion years have passed during the reign of terror inflicted by the Allied Empire of Damnation across the primordial stages of the universe, the conflict was finally won and order was restored by the surging forces of good and ideological supporters of peace, which were different but mutually-allied resistance groups fragmented from the Conservators of the Cosmos since it supposedly fell during the war of darkness that lasted for almost two billion years. During the Dark Ages, Galan and his first heralds were one of the beings who remained neutral, wherein the Devourer of Worlds continuously cleaned up the abandoned zones of the battleground by consuming most of the leftover astronomical debris and objects he and his heralds could find, until the war has finally ended and peace has been restored, as if he was a hungry cosmic scavenger living on scraps across the universe.

Billions of years later since the end of the Great Billion Years' War, as Galactus finally came across to devour the technologically-advanced planet of the Galador, the cosmic being found himself very challenged after facing the Galador's Prime Director and the notorious Spaceknights. During his assault on the planet, his power was counteracted by the Spaceknights' technology, to which they unintentionally used a powerful transmitter device, accidentally phasing Galactus and some of his heralds out of reality, transforming them somewhere else they weren't familiar before.

Arriving on the planet known as Earth in an alternate past reality of the 16th century, Galactus struggled even furthered as he and his heralds battled the defenders of the planet in the form of the Living Legends, led at the time by the historical heroic genius himself, Galileo Galilei. In the end, Galactus was almost successful in in his conquest to devour the benevolent planet due to his godly might that was the power cosmic, only to be suddenly outmatched by Galileo's one invention, which served as the human defenders' last resort to back to where they originally came from, back to the modern reality.

Rise of the Silver Surfer

When Galactus was about to feed upon the technologically-advanced planet that was Zenn-La during the last years before the modern ages, it was the selfless Norrin Radd, a long-time young native of the planet, that persuaded Galactus to spare his world in exchange for his service, offering himself as a tribute. Galactus empowered Norrin his own Power Cosmic and surpassed his morals to prevent inhabited planets from being overlooked. And thus, the cosmic powered being known as the Silver Surfer was finally born into the cosmos as the new Herald of Galactus.

Coming upon the planet Earth, a benevolent woman named Alicia Masters was able to unlock the Silver Surfer's morality and compassion ever since he was transformed by the Cosmic Devourer. He chose to stand up against Galactus along with the team of superheroes of the benevolent planet known as the Fantastic Four. With the help of Uatu, they were able to obtain a weapon of incredible power known as the Ultimate Nullifier. Standing defeated, Galactus decided to bind the Silver Surfer to Earth as punishment for his betrayal. No longer could he surf the vast reaches of space. He spent several years bound to Earth until he manages to reclaim his Cosmic Surfboard in order to travel the entire universe once again.

Having broke his promise, Galactus returned to Zenn-La, where in a rare moment offered it's inhabitants 24 hours to leave the entire planet. Galactus then consumed most of Zenn-La's biospheric energies, leaving the planet a dead husk. Thankfully, the Zen-Lavian empire were revealed to have already been prepared in the unexpected ordeal that was unleashed upon by the Devourer of Worlds, evacuating all the inhabitants of the planet into space crafts as they transfer them in a massive space station located around the orbit, just as the planet rots into a deserted landscape.

Despite some of his notable defeats and failures to consume Earth and other planets, Galactus continued to feed upon worlds and created other heralds to assist him for the next several years. It is also Galactus' belief that he is beyond the scope of being good or evil. He truly believes that he still and will always serve a purpose in the great and vast universe and will eventually give more back than he has taken and what was taken from him before.

Power Cosmic Physiology: Galactus possesses the immeasurable Power Cosmic and is one of the most powerful beings in the Universe, having near-limitless godlike powers. He was once referred to as "The Most Awesome Living Entity in the Cosmos" by several heroes, villains, and even other cosmic beings or cosmic entities across the universe.

Retrieved from "https://marvelcomicsfanon.fandom.com/wiki/Galan_(Earth-61615)?oldid=257387"
Community content is available under CC-BY-SA unless otherwise noted.