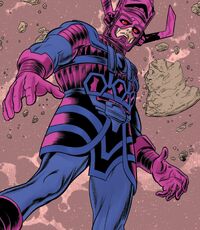 Galan was a Taa-an that was mutated by the radiation of the latest Big Bang. Emerging as Galactus, Galan roams the galaxy and survives by feeding on the energy of planets.

One day, his Punishers led him to Earth. As usual, he sent his Punishers to cause havoc on the planet's populous until he was ready to begin the process of absorbing the planet's core. Earth's defenders were able to locate the Ultimate Nullifier aboard his ship with the help of a survivor of a world he had previously destroyed. The heroes confronted him with the weapon and demanded he spare Earth. He ignored their demands, believing they couldn't us the weapon, but one of the, was able to interface with it and destroyed Taa II. Faced with the prospect of dying by his activation of the Nullifier, Galactus withdrew.

Retrieved from "https://marvelcomicsfanon.fandom.com/wiki/Galan_(Earth-32)?oldid=192819"
Community content is available under CC-BY-SA unless otherwise noted.