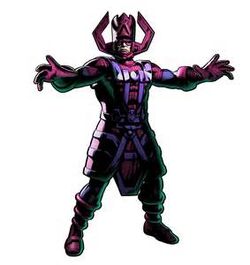 Galan, Devourer of Worlds, Destroyer of Worlds, The Hunger That Does Not Cease, World-Eater, Planet-Killer
Identity

Bad
Relatives
The Sentience of the previous Universe ("mother");

Taan (as Galan)
Occupation
Planet Devourer, Balance between Eternity and Death
Origin
Origin
Survivor of the Big Bang, gestated as Galactus within the Cosmic Egg
Place of Birth
[[Taa (as Galan)
Cosmic Egg (as Galactus)]]
Creators

Little is known about Galactus's life before his attack on Skrullos. It can be assumed to be similar to his mainstream counterpart.

Galactus was attacking a Skrullos when the team of heroes arrived to try and steal the Muonic Inducer from him. Galactus attacked the team but was stopped by the Silver Surfer. He then vowed to destroy the Earth but, though it has not been explained how yet, he was stopped by Thor.

Galactus, as the oldest known living entity in the universe, possesses one of the universe's absolutely most advanced minds. Reed Richards has admitted an inability to fully comprehend even the most rudimentary devices found within Galactus' Worldship Taa II. The Worldship itself is a solar system-sized construct that is said to surpass any natural world in beauty and splendor and yet within it's computers is contained knowledge so unfathomable and far reaching it can grant awesome power to those who come into contact with it.

Equipment: Galactus often employs his Elemental Converter when devouring planets to help him in the conversion of matter into energy. Although he does not require this device to devour planets and will forego its use in certain scenarios, it makes the conversion of energies more efficient. Galactus also wears a full-body suit of armor constructed from an unknown material of his own design that helps him to regulate and control his personal energy. If he were to remove the armor for an extended period, his vast cosmic energies could run rampant and potentially give him the appearance of a star.
Transportation: Although Galactus is capable of space travel via his own power, he disdains the needless expenditure of power and prefers to travel in starships of his own design. Though Galactus has many different starships in his personal fleet his preferred long range vessel is his sphere-shaped starship (over a mile in diameter) which is capable of trans-light speeds and inter-dimensional travel. Galactus has even on rare occasions been shown to travel in his solar system-sized Worldship, Taa II.
Weapons: Galactus often employs a robot called the Punisher; which possesses vast superhuman strength, speed, and durability to battle adversaries whose power levels do not warrant his direct attention. Galactus also keeps in his possession a weapon called the Ultimate Nullifier. This weapon has the ability to destroy any target the wielder can mentally envision. In the hands of Galactus, due to his cosmic awareness, the Ultimate Nullifier is capable of destroying entire universes and even entire timelines from beginning to end. It was revealed in the Abraxas story arc that the Ultimate Nullifier may be an aspect of Galactus himself.

Retrieved from "https://marvelcomicsfanon.fandom.com/wiki/Galactus_(Earth-6109.2)?oldid=128609"
Community content is available under CC-BY-SA unless otherwise noted.