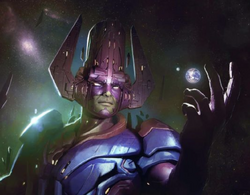 The World Devourer, The Great Destroyer, The Hunger that Does Not Cease, God of Oblivion, Gah Lak Tus
Identity

Your hubris appalls me. Me, the Devourer of Worlds whose hunger never ceases. What must that say about you?

Originally a simple family man on Taa, the being once known as Galan was reborn following the Big Bang. He was the only survivor in the new universe, having been transformed into Galactus, a being of unending hunger for anti-matter.

He began traveling from world to world, using Celestial technology to convert the cores into consumable anti-matter to sustain him. Eventually, the universe became too expansive for Galactus to travel alone. He began recruiting heralds to scout out suitable planets for consumption.

Eventually, one of his heralds perished leading him to the planet Zenn-La. There, he was opposed by a man named Norrin Radd, who offered up his services to become Galactus's new Herald, in exchange for Zenn-La being spared.

Galactus agreed, and for decades Radd, as the Silver Surfer, led him from planet to planet, most of them teaming with life, only to be extinguished when Galactus consumed their world. Eventually, their path led them to Earth.

Galactus underestimated the Earth's forces, and was adamantly by opposed by the combined might of S.H.I.E.L.D., the Avengers, the Fantastic Four, X-Force, and many more. The compassion of humanity even turned the Silver Surfer against his master, and Galactus ended up banished to the Negative Zone.

Although the idea was to starve Galactus, he was eventually able to rip his way back into the physical world. The experience had opened his eyes, and he decided that there might be more to his existence than endless destruction. While, yes, he did still require sustenance, he had never taken any pleasure in the deaths of countless species. That is why when Thanos began amassing power, Galactus dedicated himself to destroying any resources he may have.

This mission eventually led Galactus to Skrullos, where Thanos had several resources stashed. He was once more opposed by the Avengers, who helped save a portion of the Skrull species, while still failing to prevent Galactus from consuming the planet.

Retrieved from "https://marvelcomicsfanon.fandom.com/wiki/Galactus_(Earth-101)?oldid=250194"
Community content is available under CC-BY-SA unless otherwise noted.