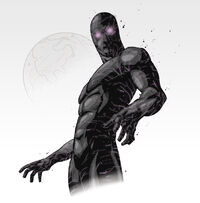 Before becoming the monstrosity known as Galactus, Gahlak-Tus served as a soldier in the Kree Empire. Little is known of his previous life except that he was a soldier.

One day while patrolling, Gahlak-Tus was abducted by the ancient beings known as Celestials and would subject him to horrific experiments for reasons unknown in what they called the Galactus Project. Gahlak-Tus was the 1111th subject.

Galactus would go on to find the Planet Zenn-La, the planet of a civilization of humanoid beings. When Galactus threatened to destroy Zenn-La, a young inhabitant of the planet by the name of Norrin Radd persuaded Galactus to spare the planet by volunteering to become his "herald" and search out uninhabited worlds for him to consume. Galactus agreed, and used his cosmic abilities to transform Norrin Radd into the Silver Surfer.

Galactus would go on to discover the planet Earth, a planet rich with energy that made it very desirable to Galactus. Galactus sent the Surfer to scout the Earth and search for any potential risks, which he did.

A full 24 hours had passed and the Surfer had not reported back to him. This led to Galactus believing he had been captured and killed, Galactus was becoming hungry and wanted Earth now!

He traveled to Earth, specifically Manhattan, and began causing havoc in preparation to devour it, until suddenly a team of costume clad heroes came to battle him. All their attacks did was prove a nuisance to him except for a grey monster, a man with a lighting hammer and a rock monster who actually managed to hurt him. He used his cosmic abilities to knock the three out and proceeded to decimate the other heroes until the Surfer and a white-haired man come to their aid. Enraged by the Surfer's betrayal, he nearly killed him until he and the other heroes retreated.

Galactus sees that they have traveled to a large tower on an island, and he went to destroy it and them. He proceeded to destroy them, but was met with some resistance by the other heroes. He quickly dismissed them, only to be attacked by the grey monster, but this time, he went all out and pounded Galactus into a pulp, who was shocked at such strength. Suddenly a wormhole opened, and the grey monster began trying to punch him into it. Galactus tripped and almost fell into it, but as he fell he grabbed the grey monster to take him with him, only to be barged by the Silver Surfer, which caused him to let go of the grey monster. Galactus and Silver Surfer fell into the wormhole and it closes.

Angered even more, if Galactus was to die he would take the Surfer along with him. He began attacking the Silver Surfer, but the Surfer harnessed all the cosmic energy given to him by Galactus and used it to destroy Galactus and himself, ending Galactus' threat once and for all.

Immortality: After being experimented on by the Celestials, Galactus was granted immortality.

God-level Strength: Galactus has demonstrated the potential for a solar scale of super strength.

God-level Stamina: Galactus can partake in physical strenuous action, like battles, for an undefined period of time, but absorbing the energy of a planet will only sustain him for a month, and using it will cause the time-span to lower dramatically, so he normally cannot fight for too long.

God-level Speed: Despite his size, Galactus can fly at speeds that greatly surpass the speed of light.

Invulnerability: Galactus is immune to all diseases, ailments, and toxins. In addition, he is enormously resistant to damage, he was able to survive from a planetary impact and nuclear arsenal, but was severely injured in the process.

Energy Absorption: Arguably his most viable power, as his survival depends on absorbing the Life Force from planets or stars. During his fight with Mephisto, he showed that he is even capable of absorbing an entire domain.

Levitation: Galactus can traverse or glide through air and space using sheer willpower.

Molecular Restructuring: Galactus can manipulate, reshape and rearrange the molecular complexions of any organism, allowing him to rebuild or redesign things internally.

Matter Transmutation: Being a cosmic being, Galactus can control matter in any object which allows him to turn something solid like lead, into something liquid like water.

Teleportation: Galactus can make himself, other people, and objects appear anywhere in the entire universe that he wishes with a mere thought. He has even teleported the planet Galador from one galaxy to another.

Telepathy: Ability to read or communicate with other minds across universal distances.

Cosmic Awareness: Galactus can sense disturbances or changes within the cosmic ether on a universal scale.

Creation: Galactus can create complex, sentient, biological or bio-technical life-forms seemingly from nothing, or at least using his control over molecules to do so.

Soul Control & Manipulation: Galactus can control and manipulate the souls and spirits of living beings at will. He uses this power to alter the memories and emotions of others.

Power/Ability Bestowal: Galactus' heralds, whom he has endowed with a minuscule fraction of his cosmic power, are able to manipulate matter and energy in ways that are far beyond human comprehension.

Vitakinesis: Galactus is able to heal himself and others from physical wounds although this may simply be molecular reconstruction.

Biosphere Recreation: After the same process that made Galan become Galactus was recreated and exacerbated with Neutronium Galactus now has the power to recreate whole planets and biospheres.

When sated, Galactus has demonstrated a solar scale of super-strength.

Cosmic Hunger: Galactus requires unknown energies obtainable only from a certain type of planets in order to sustain his life. The suitable type of planet need not to be one where life is present, but it must have the potential to support life.

Retrieved from "https://marvelcomicsfanon.fandom.com/wiki/Gahlak-Tus_(Earth-1111)?oldid=231331"
Community content is available under CC-BY-SA unless otherwise noted.