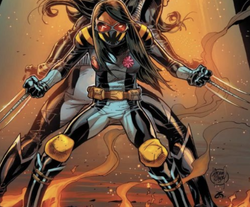 After Weapon X's genetically engineered daughter of Wolverine, X-23, proved to be a success, they began engineering another one. Sarah Kinney was artificially inseminated once more, and became pregnant with X-23's sibling.

Dubbed the X-24, she was immediately put through extensive training, as Weapon X hoped to break her. When X-23 met her father and abandoned the project, X-24, secretly named Gabby by her mother, was only 6-years-old. Her handlers then sped up the time table, putting her through the Adamantium bonding process, which she was barely able to survive, only having just manifested her powers.

From there, she was put through the same training as X-23, until the day Sarah Kinney took her and ran. She tried to raise Gabby under the radar in a small Canadian village, until the day that Wolverine and X-23 arrived. They were searching for more Weapon X bases to bring them down, but their search led them to Sarah and Gabby's home. Gabby was able to recognize their scents as her family, and instantly began barraging them with questions. However, their meeting was cut short when Weapon X revealed themselves, and assassinated Sarah.

Gabby was shocked and heartbroken seeing her mother shot down, but quickly joined her newfound family in fighting off Weapon X's forces before they made their escape. From there, Gabby joined her father and sister on Krakoa, where the X-Force began trying to teach her how to use her powers for good.