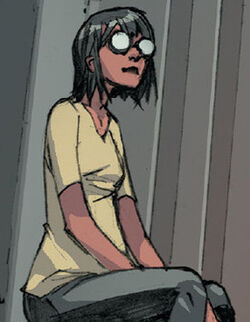 First appearance
Among Us Hide...

Gabriela is the sister of the newly manifested Inhuman Dante. She was present when another Inhuman named Lash showed up when her brother and mother were both encased in transformation cocoons due to the Inhuman Outbreak.

Lash noticed that Gabriela's mothers cocoon didn't hatch which showed that she only carried enough Inhuman DNA to enter one but not enough to survive to the process. Gabriela's life was spared because her Inhuman DNA was inert due to her pregnancy, but as she screamed out wondering what happened to her mother, her brother came out of his cocoon with a flared temper as his pyrokinetic abilities surfaced.

Retrieved from "https://marvelcomicsfanon.fandom.com/wiki/Gabriela_Pertuz_(Earth-1010)?oldid=184206"
Community content is available under CC-BY-SA unless otherwise noted.