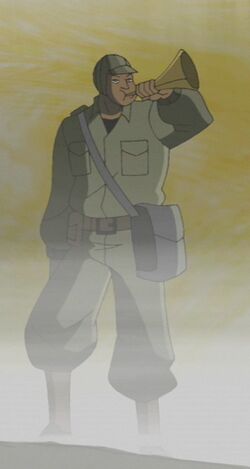 We barely got out of there alive, and you want us to go back?

Gabriel Jones is a soldier in the U.S. Army and a member of the elite allied unit led by Captain America know as the Howling Commandos

Gabe hailed from Macon, Georgia where he studied both German and French before the war broke out. Gabe would eventually join the 92nd Infantry, a unit he described as "All black, all proud.

Gabe and his unit where was captured by Hydra and placed in a cell with other allied prisoners. When Captain America single handedly infiltrated the facility. He freed Gabe along with the other prisoners and wreaked havoc on Hydra and the base by controlling a Hydra tank with Dum Dum Dugan, coming back to US military base immediately after.

Gabe and his freed comrades were invited to join the Howling Commandos and he happily accepted. Along with the other Commandos, Gabe took part of every assault against Hydra, and it was Gabe that took Hydra scientist Dr. Arnim Zola into custody. Jones was present at the final assault against Hydra and was one of the last people to speak with Captain America before he was lost to the ice on board the Valkyrie.

The Smithsonian Institution in Washington, D.C. created an exhibit which featured Captain America with the Howling Commandos.

Speaks both French and German

Retrieved from "https://marvelcomicsfanon.fandom.com/wiki/Gabriel_Jones_(Earth-1010)?oldid=172526"
Community content is available under CC-BY-SA unless otherwise noted.