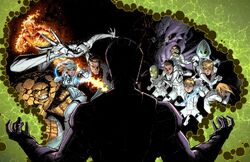 Over a decade ago, the U.S. government, under the auspices of the Directory of Mainland Technology Development, has began gathering international child prodigies at a Manhattan laboratory facility in the Baxter Building, giving them the best resources and teachers the project could afford. Headed by scientist Franklin Storm and the United States Military's General Ross, the project discovered the Negative Zone (also called the N-Zone), an other-dimensional space which paralleled our own. Unbeknownst to the government, the plans would become something much, much greater, with the expedition to the N-Zone has resulted to four younglings becoming infused with cosmic powers, subsequently leading them to form one of the first superhero teams, greatly known as the Fantastic Four.

Decades have since passed since they became the first heroes of the Modern Age of Heroes, and by the great rebirth of the whole multiverse since the premature heat death of the latter, the Future Foundation was now created by Reed Richards (Mister Fantastic) as an organization with the intentions to bring humanity into a greater and peaceful future after his planned possibly permanent retirement as the renowned heroic genius and long-time Fantastic Four leader. In this scientific and visionary organization, Richards decided to put together a new group, a next generation of free-thinking individuals, both young and old, to plan for a better future for all of humanity and Earth, following the original footsteps of the already disbanded Baxter Mission, which had led to the four's creation. According to the great Richards, he had also planned the foundation as the potential successors of the Fantastic Four themselves, young and bright heroes of the future.

Retrieved from "https://marvelcomicsfanon.fandom.com/wiki/Future_Foundation_(Earth-61615)?oldid=229825"
Community content is available under CC-BY-SA unless otherwise noted.