Start a Wiki
"Friday the 13th" is the twenty-fourth episode of Assemble!'s Season Four and the ninety-seventh episode overall.

-I can’t believe this! Look who’s trying to rob some jewels! How is that possible?! - Spider-Man exclaimed ironically to himself, watching Black Cat from a rooftop. The wall crawler swung to the burglar and jumped in front of her. -Stop there, kitty. -

-Oh, Spidey! - She exclaimed. -I was looking forward to seeing you! -

Suddenly, a female figure jumped in front of the two. -She’s mine, Spider-Man. -

-I am Domino, mutant… And this jinx caster is coming with me. -

-I do. As a probability manipulator myself, I am in charge of getting luck’s balance unaltered for evil. -

-See what you did?! - Spider-Man shook his head and swung away after the white-haired woman, and Domino followed him immediately afterwards. Shooting at the Black Cat, the mutant jumped from rooftop to rooftop, holding herself to a balcony with her legs. However, her luck manipulation was cancelled by Hardy’s powers on her and she got back to the rooftops.

-I have never been without my powers, at least not since my X-Gene first showed. - Thurman muttered.

-What do you mean? Why do you say you don’t have powers right now? - Peter asked.

-Black Cat’s powers cancel mine, and mine cancel hers. Therefore, we are both powerless against each other. -

Peter shot web fluid at Felicia, pulling her to him.

-Oh, darling! I know I’m bisexual but I’m not into you! Too much makeup! -

-Ok, I’ve had it! - Neena kicked the burglar who retaliated and kicked the mutant back.

Parker jumped and started punching Black Cat, who managed to evade every hit.

-Love, I am not into that! At least not without a kiss first! - Hardy smirked, clawing the wall crawler and running away again.

Spider-Man dodged a chimney, before the duo jumped on a museum’s rooftop.

-Why do always museums have glass windows on the roof? - Peter asked, running above the different expositions, perfectly identifiable through the clean glass.

Suddenly, the glass under Parker’s feet shattered, making him fall inside the building. Neena ignored what happened to the hero and kept on running. She stopped, got a grenade out of her belt and threw it at the burglar, but it was deflected by a blade, making it explode mid-air.

-Don’t you dare damage the jewels. - The owner of the sword raised an eyebrow.

-Who are you? - Domino asked, peeking over the woman’s shoulder.

-Too bad, Marilyn Manson. You’re in Hell’s Kitchen. We own this. - She raised an eyebrow, smirking.

-This is a probability manipulating individual, my jurisdiction. Wherever they are. -

-I really don’t have time for you. - Silver Sable turned around and gracefully jumped between the rooftops.

Domino smiled from behind and tossed a knife at Manfredi, who heard the sharp blade cutting through air and deflected it with her sable.

-I don’t need powers to defeat you, sweetheart. -

Neena leaped forward and shot Silver, weakening her. The mutant punched and kicked the Maggia member, who looked up at her from the floor.

Suddenly, a portal opened above Black Cat’s head, and winged demons flew past her.

-What the-? - Silver asked, looking at the creatures.

Felicia, taking advantage of this, fired a grappling hook at the demon and once it got attached, she started flying away after it.

Manfredi got a small knife out of her boot and tossed it at the cat-burglar, cutting the thin rope. The Maggia member got a grappling hook blaster and fired it at Hardy, pulling her back to the rooftop. Domino got to the duo and handcuffed Black Cat behind her back.

-You can keep the jewels. - Thurman muttered. -I take her. -

-Sounds fair. - Silver Sable nodded, picked up the jewels and jumped away from the scene.

-Where are we headed now? - Hardy asked calmly.

-You’re gonna be evaluated and probably locked up by the Professor. -

-Oh, I know. But you’re powers are on the same level as mutant powers, so the X-Men have a word in this situation.

As Neena was about to toss Felicia inside her personal jet, the criminal unlocked her handcuffs with her claws and turned around, getting behind Domino, before kicking her inside the jet instead and locking her in.

-You rely too much on your powers, mutant. - Hardy smirked through the bulletproof window and fled.

Neena turned the intercommunicator on and contacted the Utopia Division.

-Hello, Neena? - Jubilee asked from the other side of the country.

-Jubilee… Can someone please come to New York and help me out? Someone got me into a trap. -

-Wow… That person must be really skilled to trick you! -

-Illyana and I will head to New York immediately, don’t worry! -

-Hello? - Peter asked, looking around at the empty museum. -Anyone home? Ben Stiller? Are you there? -

Suddenly, two figures appeared in the dark. -Who’s there? -

-A hero! - One of them said tauntingly.

-You could say so. - One of them revealed himself, but it was in vain because his face was covered by a hood. -Now, let us work in peace! - He yelled, firing an electrical blast at Spider-Man. 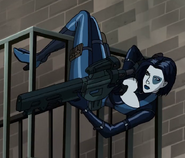 Spider-Man pulls Black Cat to him

... who kicks the mutant back

"Love, I am not into that! At least not without a kiss first!"

"I don’t need powers to defeat you, sweetheart."

The mutants punches and kicks the criminal

Retrieved from "https://marvelcomicsfanon.fandom.com/wiki/Friday_the_13th_(A!)?oldid=120053"
Community content is available under CC-BY-SA unless otherwise noted.