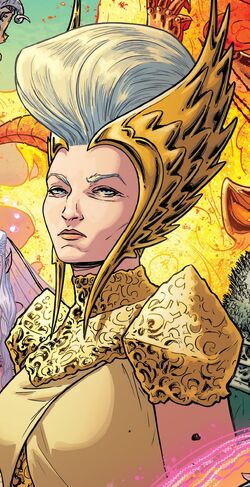 I was raised by witches, boy. I see with more than eyes.

Raised by witches, Freyja went on to marry the Asgardian Allfather, Odin. Together, they had two sons, Balder and Thor, and later adopted a Frost Giant baby named Loki.

Freyja was always the most compassionate parent to Loki, as she always accepted him for who he was. She even trained him in the ways of her witchcraft, and was heartbroken when he began scheming against his father and brothers.

However, she never lost hope that one day Loki would return to the light. Even when Odin's brother, Cul, returned to wreak havoc on the Asgardians. In the end, it was Freyja who convinced Loki to help defeat him. She was able to survive Cul's incursion, and then helped Thor rise to his role as the Allfather.

Retrieved from "https://marvelcomicsfanon.fandom.com/wiki/Freyja_Freyrsdottir_(Earth-101)?oldid=250192"
Community content is available under CC-BY-SA unless otherwise noted.