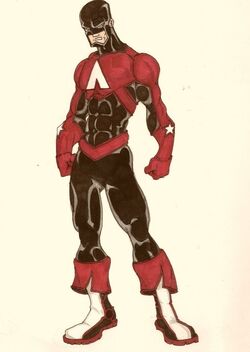 I will fulfill his legacy. That knockoff doesn't count. Let's hope I don't let him down.

Eugene "Flash" Thompson was frequently abused as a child. He had a poor home life, and thus became a bully in school. One of his most frequent victims was Peter Parker, the man who would later become Spider-Man. His bullying made him popular in school, but he really lacked anything resembling a sense of humanity. He admired Captain America, and often would go around promoting him. Many people agreed, saying he was one of the world's greatest heroes, but soon, people got tired of hearing it, and he began to become disowned for his admiration of superheroes. Despite this, he began to admire Spider-Man as well.

Soon, when his father was killed, Flash decided to quit school and join the United States Army. Serving abroad, he was one of America's best soldiers, effective and loyal to a large degree. Soon he was selected by Karl Malus to attempt to recreate the Super-Soldier Serum. The procedure nearly killed Flash, but he gained peak-human levels of strength, endurance, and durability. Taking the codename of Captain, Flash returned to America and became a vigilante, fighting crime across the city.

Eventually, the Captain decided he would like to join the Avengers to honor Captain America's legacy. He was also sought out by Spider-Man to join the Avengers. After meeting with Peter, he told him that he was the Captain, and that Spidey had come to visit him, to which Peter replied that he knew, since he was Spider-Man. Flabbergasted, Flash joined the Avengers alongside Cloak and Dagger. Soon the team grew even larger, and Flash changed his name and costume, taking the new identity of U.S.Agent, co-leader of the Avengers.

As a result of undergoing the process of the Power Broker, Flash's body tissues have been enhanced. This grants him:

Expert Combatant: U.S.Agent is skilled in many forms of combat due to his time serving in the U.S. Army.

Equipment: None known.
Transportation: None known.
Weapons: Shield: U.S.Agent wields a shield that appears to be a duplicate of Captain America's shield.

Retrieved from "https://marvelcomicsfanon.fandom.com/wiki/Frederick_Thompson_(Earth-5)?oldid=244898"
Community content is available under CC-BY-SA unless otherwise noted.