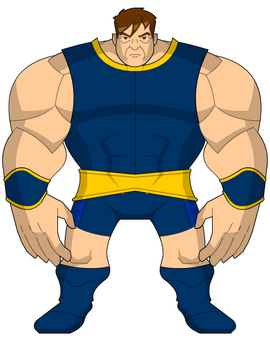 I think I've come to a metaphorical coin toss. I can picks heads, take the high road, and join your team. Or I can flip tails, stay here as a carnie, and be mocked for my "individuality." I'm not taking the chance with that coin. I'm in.

Fred Dukes was a ladies man for his entire childhood. All girls liked him; he was a little gruff, but mostly sweet. Soon he began lifting weights to impress them even more, and he found himself soon able to bench 80 pounds in 7th grade. But the following year, his mutation kicked in. He became obese, and he became stronger, but his life fell into shambles. Girls no longer liked him, not even his family appreciated him anymore. He tried committing suicide, but he was unable to cut his skin. Deeply depressed, he joined a traveling carnival. He became the circus strongman.

Having heard of Fred, the original X-Men approached him, but he was unwilling to join them. They fought him, and he was mindwiped. But he was able to resist enough to remember them, but he had developed enough respect to keep it a secret. He later mailed them a letter, stating that he was sorry for what he had done, even though he still could not join them. He was deeply affected upon hearing the news of the X-Men's death, especially Jean Grey, and he then wanted to join again, seeing that Cerebro and Magneto were good mentors. But enough of the mindwipe was successful that now he could not remember where they were based.

Soon the Professor approached Blob, telling him that the remaining X-Men were being held captive by an evil mutant, and he needed his help to save them. Happy to have finally found him, Blob readily accepted. He was a less potent fighter in the field, but he didn't care. He developed a signature move, and he was an X-Man, so he was happy.

Superhuman Strength: Blob is capable of lifting over 70 tons.

Invulnerability: Blob does not feel pain, and his skin reflects most impacts. He can absorb or reflect most impacts with little difficulty. He is immune to skin diseases and frostbite.

Gravity Control: Blob can increase the gravity around himself, making himself immovable. He can also negate it, levitating in midair. He can use these in conjunction, by levitating and then instantly negating it, falling to the ground and creating a massive shockwave.

Combat Skill: Fred has trained in martial arts, and knows many forms of combat.

Retrieved from "https://marvelcomicsfanon.fandom.com/wiki/Frederick_Dukes_(Earth-5)?oldid=244897"
Community content is available under CC-BY-SA unless otherwise noted.