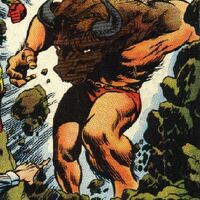 Magnus lived on Olympus for several years with his father, Ares and brother Tenco, but was sent to Earth as an experiment to see if gods can fit in as humans. He changed his name legally to Frederick Dukes and got a job as a postman. Tenco became jealous of Frederick, so he went to Earth and legally changed his name to Matt Murdock, he becomes known as the supervillain Hobgoblin, to fight his brother. Fred became a superhero known as Bullseye and fought his brother. During the fight, they were kidnapped by their uncle Lester, now known as Black Bolt who is now an Inhuman criminal with the powers of Shapeshifting and Energy Manipulation.

Somehow he escaped, and two years later he met Antonio Rodriguez during the Battle Of The Moon. Three days later he met him again as Dr. Henry Walters, but didn't suspect at all that it was Antonio. Walters confirmed that he was in fact Antonio and offered Fred membership in his rebellion, but he declined, since his mother was in the Ruler Regard. When Antonio pressed the matter, Fred knocked him out in his god form.

After Clanmaker took control of the Rebellion, Fred joined. He learned that his teammate, John, was going to marry his mother, but Fred didn't approve of John, saying he wasn't good enough for his mother. Shahonda and Hobgoblin teamed up to kill John, but Fred saved his life and knocked out both of his aggressors.

he comes to John and Natasha's Wedding, though not liking John.

Retrieved from "https://marvelcomicsfanon.fandom.com/wiki/Frederick_Dukes_(Earth-37U)?oldid=262164"
Community content is available under CC-BY-SA unless otherwise noted.