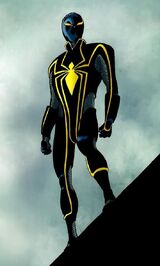 It's just the way I am

The origin of Freddie Bryant has become an intriguing mystery. in this universe, S.H.I.E.L.D had locked away the bulletproof spider suit at the request of Peter Parker who would occasionally use it as an alternative. One day, a mysterious individual named Freddie Bryant would sneak into S.H.I.E.L.D undetected and steal the bulletproof suit for himself. Freddie also stole web-shooting wristbands that he would wear under his suit due to the fact he does not have the powers Peter Parker possesses.

Freddie's true motives are yet to be revealed. It has been hinted that Freddie may be attempting to taunt the real Spider-man by doing such things like killing thugs on the streets, continuing his activities as a thief and so on.

Freddie Bryant does not possess any powers.

'Expert thief - Freddie is highly skilled thief. An example of Freddie's skill was when he stole the bulletproof spider suit from S.H.I.E.L.D and went completely undetected.

Swordsmanship - Freddie is considered a capable swordsman. Swordsmanship has become his alternative since he does not possess any superpowers.

Intimidation - Freddie strikes fear into many of the gang members he has manipulated.

Street smarts - Freddie has a connection with over 5 gangs in New York.

Recklessness - Freddie is known to take as many risks as possible in order to achieve his goals. Unfortunately, this can result in Freddie walking into a trap.

Equipment: Web-shooting wristbands - Due to the fact that he does not possess the powers the real Spider-man has, Freddie stole a pair of special wristbands that could grant him webbing capabilities.
Transportation: None known.
Weapons: chokutō - Freddie wields a chokutō-style sword.

Retrieved from "https://marvelcomicsfanon.fandom.com/wiki/Freddie_Bryant_(Earth-5524)?oldid=172193"
Community content is available under CC-BY-SA unless otherwise noted.